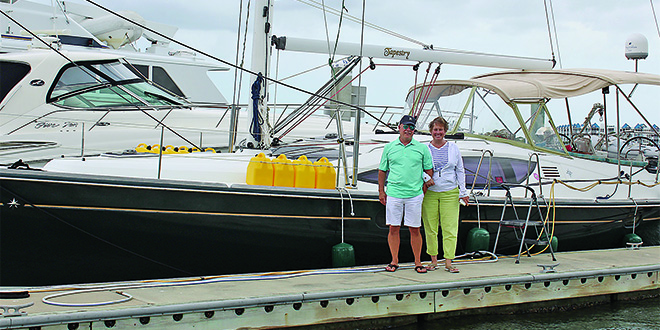 Photos by Samantha Husted: Ray and Cherie Yager outside of their sailboat home.

It sounds like the plot of a movie. A retired couple, tired of their life on land, packs up all their earthly belongings; sells their car, their house and sets sail for the open ocean.

While this story may seem far-fetched or fantastical, it’s exactly what high school sweethearts Ray and Cherie Yager have done.

The Colorado couple set sail, last month, out of Marco Island for what they believe to be an adventure of a lifetime. They plan to live on their sailboat Tapestry with their two dogs and travel the open ocean wherever they see fit, essentially sailing until they can sail no more.

The inside of the boat is homey. It’s equipped with a gas stove, grill, oven and a shower. The cabin is large and there’s room to walk around and even lounge.

In order for this whole scheme to work, the couple had to sell most of their belongings. According to Cherie it was the car that was hard to let go. “It was a shock getting rid of the car,” she said with a laugh. 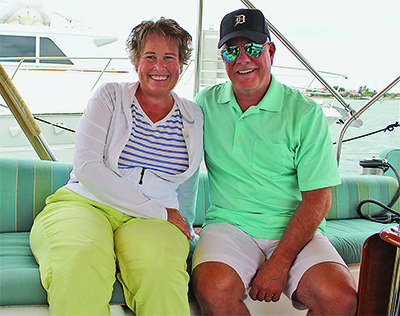 Cherie and Ray Yager plan to sail for thenext five to 10 years.

aspiration the couple said they’ve always had, something they’ve dreamt about since they were teens, when they first started sailing back in their home state of Michigan.  Now, after retiring early, it seems it’s finally come to fruition. It’s a dream that has been 40 years in the making.

“We’ve been fairly conservative,” said Ray Yager. “We’ve always harbored this dream, though, always loved sailing. It just seemed like the natural thing to do.”

While natural may not be the adjective most people would use to describe what the couple plans to do, it seems fitting for the Yagers. And although they’re excited for the adventures to come, they are also wary of the dangers that being in the open ocean can present, with weather being the biggest concern.  But it seems they’ve done their research and they’ve equipped themselves with the latest navigation technology. The Yagers are as confident and prepared as anyone could be for such an adventure.

“For the average person, this would be difficult to conceive, especially when you think about going 500 miles out in the middle of nowhere in the Atlantic Ocean,” said Ray Yager. “No sign of land for days and days and days.”

Who knows when the Yagers will resurface. But for now they’re happy traveling the ocean and seeing where the current takes them.