Sailing Away on Marco Island 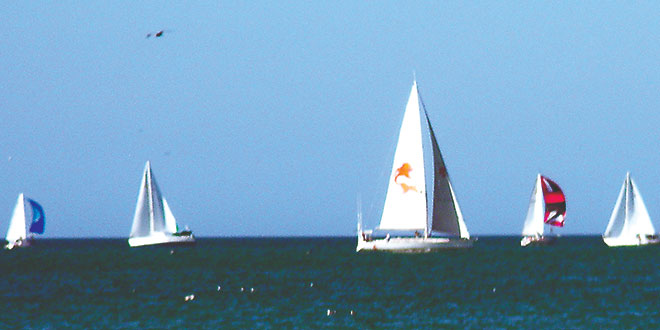 Emily Wertman received a surprise when she decided to stroll the sands alongside the Marco Island Marriott Beach Resort, Golf Club & Spa before checking out on a recent Sunday morning.

The Aventura resident was greeted by the sights and sounds of a colorful aquatic competition, the Marco Island Yacht Club’s Annual Fall Regatta, held Nov. 15-16.

Before Wertman were boats racing through the Gulf of Mexico’s waters, propelled by brightly hued sails as they navigated a triangular, three-mile course marked off by red inflated buoys between the Marriott and the Caxambas marina.

“I walked this way and back, and took some pretty pictures,” Wertman said at about 10 AM as the warm breeze ruffled her hair. “I don’t know anything about regattas or sailboats, but it’s pretty to look at.”

Wertman offered up those comments beneath the shade of the chickee hut where Chuck Downton sat broadcasting race updates to beachgoers through a pair of loudspeakers.

Started in 2000, the regatta serves as a fundraiser for the Marco Island Community Sailing Center Youth Sailing Program, which promotes interest in sailing through its education and 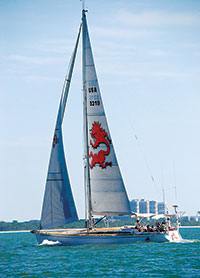 A beautiful day for a regatta. Photo by Noelle H. Lowery

“We have some of the kids on the boats today getting some ‘big boat’ racing experience,” said Downton, the Yacht Club’s Sailing Fleet Captain and regatta co-chairman, along with Lois Dixon.

Joining him in the chickee hut was his wife Meredith, who stressed the importance of the funds the regatta generates. “The youth sailing program is expensive for people to enroll in, and that’s why we’re trying to raise money, so they can use it toward scholarships for the kids,” she said.

The regatta includes two classes of sailboat — spinnakers and cruisers — divided into competitive classes based on type, size and sail configuration. Racing is held on Saturday and Sunday. There were 12 competitors in this year, all hailing from the Marco and Naples areas.

The festivities begin on the Friday preceding the race with a reception at the Yacht Club for skippers and their crews. Saturday’s race is followed by a cookout, and the regatta closes out with a Sunday evening awards dinner and silent auction.

Chuck Downton said the regatta raised about $2,500 for the Youth Sailing Program this year. “Merchants 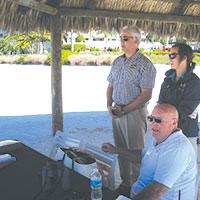 and restaurants and golf courses and a lot of places all around the island have been very generous with their donations,” he said.

The Youth Sailing Program began 12 years ago for youths 8-13 years of age, and it is operated by a volunteer board of directors in conjunction with the city of Marco Island Parks and Recreation Department. Over the years, the program has grown to serve more than 100 children each summer on the beach between the Yacht Club and the S.S. Jolley Bridge.

Fund raising is essential to enable the growing program to meet demand and expand, said Rocky Cale, president of the Community Sailing Center, which puts on the youth program.

“Last summer, we had the most successful season we’ve ever had,” said Cale. “We put 126 kids through the program. We offered three levels of instruction: beginner, intermediate and advanced. This program is really primed to really explode next year so fundraisers like this are really important to us because it allows us to upgrade our equipment, our boats and our facilities. Without it, we wouldn’t be able to do 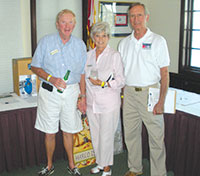 it. The last thing I want to do is to have to turn kids away next year.”

Cale said he hopes to raise $30,000 before next summer for much needed equipment repairs and replacement.

Franklin Rinker of Marco has taken part in the regattas since their inception. “The future of boating is to have these young people learning to sail in their youth, and who knows, maybe they’ll buy a boat when they’re 50 and join the yacht club,” Rinker said prior to the awards dinner.

Martin Pilote of Marco and Quebec is also a regular regatta participant, this year riding along on the 53-foot Swan, “Dragon Fly Plus,” owned by Dr. Ulrich L. Rohde of Marco.

“It was really, really good,” said Pilote of the two days of sailing. “We had a really good weekend. There was good wind for the boats.”