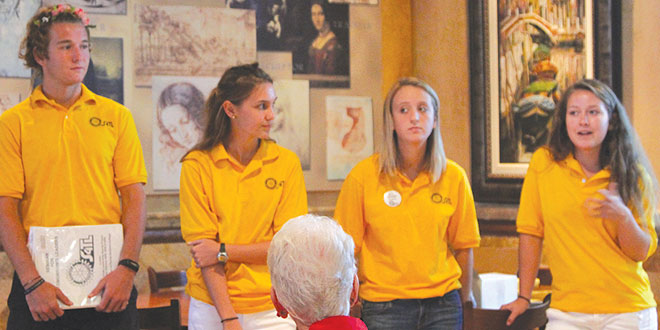 Five young students entering into their senior year of high school were chosen by the Sunrise Rotary Club and the Noontime Rotary Club to attend a weeklong Students 4 Tomorrow’s Leaders (S4TL) program. The program was held at Florida Southern College in Lakeland.

Students from all over Central and South Florida converged on the campus, where past S4TL attendees greeted them as they arrived and divided them into groups. The students were housed on campus and had all meals there during the weeklong camp.

Team building exercises and motivational speakers are presented throughout the week along with numerous “rap sessions.” When the students returned, they spoke to the Rotary Clubs about their experiences. Jordin Giles, Jessica Simon, Christy Thorstensen, Diana Vickers and Gage Wheeler represented the local clubs and spoke to the Rotarians.

Simon said she learned not to judge people: “It really opens your eyes. Everyone has their story, and we can’t imagine what that story might be.”

Vickers said she learned to speak to people: 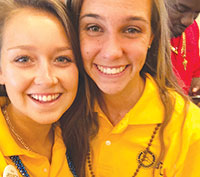 Jessica and Christy during camp.

“It’s kinda cliché. I learned so much. There is no way to put it into words. I feel more confident. I have never cried so much, nor seen so many people cry at one time. It was so impactful.”

Thorstensen said, “I thought it was going to be typical leadership stuff. You go from a group of eight people not knowing each other to becoming lifelong friends. It was one of the greatest experiences of my life.”

Wheeler thanked the Rotary Club: “I had no idea what to expect. No matter who you were, it was a life changing experience. I learned how you can go up and talk to someone and really make a difference. It was like they gathered up the nicest people in South Florida and put them in one place. If I could, I’d go back every week.”

According to Rotarian Al Diaz, “Our future, if in their hands, is very bright. These students are bright young adults who are caring and really want to make a difference in the world.”