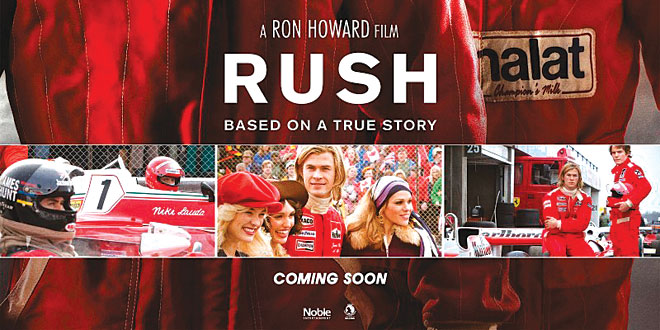 The setting is Europe. The critical year is 1976, although it’s mingled with a number of flashbacks. The movie centers about the rivalry of two Formula One race car drivers, one handsome, dashing and British; the other Austrian, not so handsome, not so dashing – indeed dour, arrogant – and Austrian. This fascinating thriller is more about the two opposite personalities, and their approaches to life, than it is simply about racing incredibly fast cars around the European Circuit.

Interestingly, both main characters, James Hunt (Chris Hemsworth) and Niki Lauda (Daniel Bruhl) were from fairly aristocratic stock. They chose to race rather than pursue myriad occupational alternatives there for the taking. They both started in the lower Formula Three circuit, but quickly zoomed up the ladder to the rarefied atmosphere of Formula One where Ferrari, Cotsworth and other notable machines dominate.

Director Ron Howard (yes, the kid “Opie” from the Andy Griffith TV show of many years ago) and screenwriter Peter Morgan, who previously worked together on “Frost/Nixon,” team up to give us a thriller, filled with noisy, fast, dangerous cars, and two men of two opposite demeanors, who get to the top using those differences. Hunt prefers wine, women and more women. He drives by feel and instinct. Lauda is the cold, mechanical perfectionist. He drives by the book in a finely tuned racer he has not simply left to the mechanics.

The race scenes are spectacular, often blurred by the speed of the racers. The dangers are jarringly 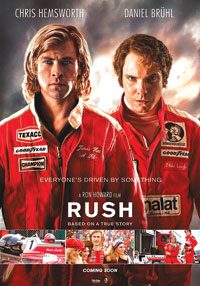 and vividly shown, as are the various drivers’ emotions – including Hunt’s inevitable nausea before every race. Their personalities come through in their relationships, particularly with women. Hunt, the Gorgeous Hunk, marries a beautiful fashion queen in her own right (Olivia Wilde) but he cannot maintain their relationship and goes the way of the Lothario. Lauda loosens up one magnificent summer day in Italy and lets his guard slip just enough to reach our affection. He works hard at racing, but also preserves his marriage as the two rivals trade wins in the 1976 season to determine the overall champion.

Ron Howard slows the rapid-fire pace enough to re-run the 1976 German Grand Prix at the most well-known dangerous grand prix course in the world. Lauda has a horrific accident in which he suffers excruciating burns. The movie shows his slow and painful recovery and his unyielding determination to return to the track. If he was inferior to Hunt in looks before the accident, he is badly disfigured afterward, but he perseveres in order to be in position to regain his throne.

There’s a bit of poetic license in the story. Hunt and Lauda apparently were much friendlier rivals than depicted. Indeed, they were reportedly once housemates in their earlier years. But, the movie stays close enough to the facts to give us a portrayal of two lives, two personalities and two outcomes. Do not be deceived. This is not simply a race car movie for Formula One fans. It is far more, and keeps you riveted on the characters as much as the action.