Running a Natural Parting for the Raymonds 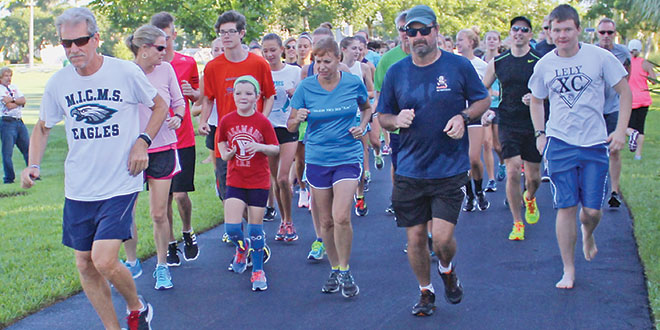 Photos by Roger LaLondeRoger Raymond leads runners for a casual jaunt at his going away run.

Like thousands of practices, Roger Raymond led his stalwarts on a run around Mackle Park, but it wasn’t the same.

It was his athletes, young and older, and parents, gathering to recognize him and wife Karen for their years of service to Marco Island Charter Middle School (MICMS), Marco Island Academy (MIA) and the community.

The Raymonds are moving to Orlando due to an illness in their family.

Nearly 100 people came out for the Raymond Going Away Run on August 28.

Damien Shadrick, who played for Raymond’s 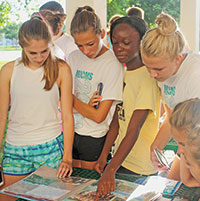 first MICMS basketball team, will be the new athletic director.

Poling put together a scrapbook, highlighting the Raymonds’ careers, mostly involving sports. It included photos and letters from some of the athletes who learned about running and life. As Karen admitted, she was the quiet assistant coach.

Some of the athletes were asked to read the letters they wrote that were included in the book.

Emma Fernandez, now in track and cross country at Lely, found it difficult to express in words what she put to paper.

Through tears, Fernandez said, “I learned a lot in my three years (at MICMS). I learned what it was to be truly dedicated. I learned to rely and trust my teammates, forming a sisterhood. Fast, or not fast, you treated me the same as anyone else. What I learned carried on into academics.”

“I am a senior and I know because of you and Mark McGarity (Lely cross country and track coach), I am a better person,” she 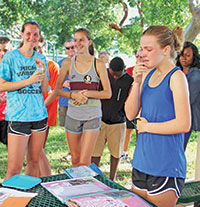 Ellie Poling couldn’t hold back the tears speaking about the Raymonds.

Seventh grader Ellie Poling couldn’t hold the tears back. “He is the best cross country and track coach in the county,” she said, but could say no more. Raymond gave her a hug, saying, “You have said it all.”

Sam Nemeth, another of Raymond’s athletes, said, “I am extremely upset you are moving, you are the best coach I ever had. It will be a new chapter in your life. You may not always remember me, but I will always remember you.”

Mickey Poling, now running at Lely, said to Roger, “From the beginning you have always been there, not with negatives, with positives. The miles I ran with you were important times.”

as an assistant to Roger at MICMS and MIA.

Today, he and wife Alysha have a 19-month-old son Jack and are expecting a second child later this year.

“I started playing for him in sixth grade, he said. “A definite role model, he is just a great guy. He put in a lot of time just helping kids.”

“As a parent, I found Roger to have unbelievable determination that he instilled in his kids. He was a big part in kids believing in themselves and giving more than they sometimes wanted to do.”

Rosie Poling, now a standout in cross country and track at Lely, was all everything when she was at MICMS. She still has the county middle school records for the two and one-mile distances. 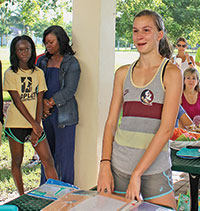 Emma Fernandez, former MICMS cross country and track star, shares an emotional moment as she reads her letter to the Raymonds.

there to pick her up. “He did the little things, like calling, telling me he was proud of me.”

McGarity spoke on how the Raymonds were successes.

“Karen led an outstanding music program (at MICMS),” he said. “Roger and Karen gave their time, investing in the students and athletes. When they are gone that will be when people will realize their importance to the school and community.”

Travis Barry, who has been an assistant coach for cross country and track, takes over for Raymond as the MICMS head cross country coach.

“Roger is a very consistent person, that makes him a success,” he said. “He is the type of person you want to have your kids around. He knew how to push my son Kevin’s limits. Kevin is a MICMS eight grader who runs cross country and track, and is on the basketball team.

“Roger is disciplined, yet a fun guy with a good sense of humor. A real down-to-earth person and a pleasure to

Roger and Karen Raymond give a toast to the nearly 100 people who came for the Raymond Going Away Run.

be around,” Barry said.

Karen Raymond, as expected, said little. “Roger does the talking,” she said. “We are going away, but we will never forget what we have here.”

“Many athletes went on to represent Lely and Marco Island Academy as Winged Foot candidates,” he said.

“Running is a measure of a person,” he said.

Each year when cross country started, Raymond said he told his athletes, “When you go home look in the mirror. Do the same thing each day. You will find a better person at the end of the season than you were in August.”

“When you tow that line to start a race, I would like that you are thinking about me. I will be thinking of you.”