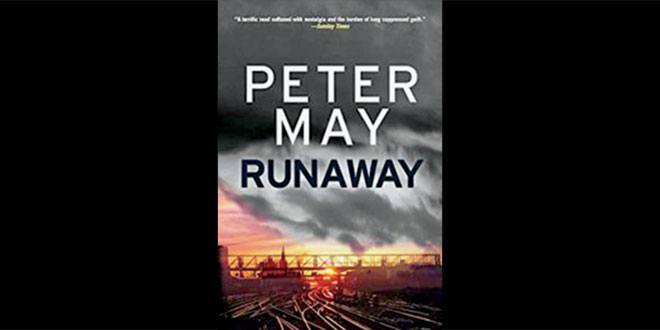 This book is a must-read for any mystery lover, Anglophile, or Baby Boomer. In addition to having an exciting storyline, it is beautifully written with luscious language: “Moonlight cascaded across black water below us as we drove down into a larger town beyond the village of Threlkeld. Its street lamps twinkled in the night, light pollution masking the great canopy of the cosmos whose jewelled sky had, until then, sparkled above our flight path.”

The “flight path” refers to the drive that five 17-year-old Glasgow boys, all members of a band “The Shuffle,” take to London. They are on a quest to escape their humdrum so-called lives and find fame and fortune in the U.K. capital city. Their getaway is precipitated by one of the guitarists, Jack Mackay, being suspended from school. He decides to chuck it all and head south to make a newlife of his own. He leaves a note on his pillow for his parents to find the next morning. Soon, all four other band members join the quest. Jeff, the drummer, and the only one of them not in school, manages to procure a van from the car lot where he works. It is big enough to stow their gear in the back and give them space to stretch out.

They are high on the exhilaration of shedding their old lives and parental straight jackets, making music and singing, when they stop at a diner for a meal. Jeff strikes up a conversation and feeling of kinship with a young man at the diner, offers to give him a lift home. Jack objects, having felt “bad vibes” from this stranger but since Jeff is the driver and owner of the van and the stranger has offered them shelter for the night, off they go. It isn’t long before Jack’s perception is proven correct. They are waylaid by the stranger’s cohorts and their money stolen. This is just the beginning of their troubles, though they do manage to reach London.

In the introduction of the novel a murder is described where only the name of the victim, Simon, is revealed. The dialogue makes clear that Simon knows his murderer very well and has been eluding him for decades. Then the focus is shifted to Jack Mackay, now 67 in the year 2015, and carrying a walking stick that he doesn’t really need but has come to accept as an appendage. Jack is taking inventory of his life, feeling the crush of mortality and the bile of regret for letting fear rule his life choices. He determines that he will help Maurie Cohen, The Shuffle’s lead singer, in his dying wish to retrace their “flight path” from 1965 and return to London. All Jack knows is that it has something to do with the one band member they left dead in London 50 years prior. Maurie will tell him nothing else.

After enlisting Dave, the other Shuffle guitarist and now confirmed alcoholic, into joining him on Maurie’s last quest, Jack bullies his grandson Ricky into being their driver. They then contrive to have Ricky impersonate a physician and “liberate” Maurie from his hospital bed. In Ricky’s car, they retrace their 1965 flight path, save for a few improvements in the road system which make the trip much quicker – except for Maurie’s frequent stops to accommodate his bodily reactions to chemotherapy.

May uses the now very popular style of alternating time periods in telling the story, shifting between 1965 and 2015. He does it seamlessly. I found the characters so well developed and the plot advanced so smoothly throughout the chapters in each time period that I couldn’t wait to get back to that year and see what happened next. There are 327 pages in this book and every word thrusts the story forward, reveals more about each character and their environment. May’s writing is so vivid that I could “see” these events in my mind’s eye.

This novel is the product of a man who mastered his craft long ago yet somehow has learned to improve on perfection. About the same age as his protagonists, Peter May has been writing his entire adult life. In addition to many novels, he has written scripts, created and produced drama for U.K. television. He has awards from America, from the U.K., France and is the only Westerner admitted to honorary membership in the Chinese Crime Writers Association.

It is also interesting to note that May did get expelled from school, took a very boring job in a bank and decided one morning to change his life and escape to London. But first he made a trip back to school to tell his best friend Stephen Penn what he was doing. Penn decided to go with him. Their other two band members decided to come along. They packed up the group van and headed for the big city. After a week of arguing and scraping by, they broke up and Penn and May were together for several more days. Finally they called Penn’s uncle in London who drove up, fed them, got them showers and clean clothes, called their fathers and put the boys on a train to Glasgow. Their fathers’ reactions? “Well done, boys, we’re glad you had the courage to come back.”

“Runaway” has just recently been released in the U.S., but he already has another novel, “Coffin Road,” set in the Hebrides, that was released in January in the U.K. So, keep an eye out for its U.S. release. If you love mysteries and suspense and are not yet acquainted with Peter May, you are cheating yourself and need to correct that deficit immediately. Thanks to Sharon for recommending this very good read! It was a real treat. I would rate “Runaway” a 4.5/5.0.