Rumination from the Rock and Beyond: Changing the World, One Invasive at a Time 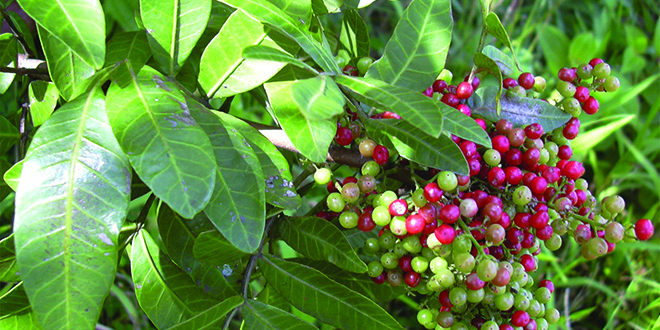 Not to be confused with illegals, an invasive is some natural species that is a detriment to the Florida ecosystem. An invasive can be a reptile, fish, animal, flower or tree, so let’s leave the possibility of invasive people out of this discussion for now, no matter what you might think about UFOs.

Some examples of an invasive in Southwest Florida include the Cuban tree frog, the Burmese python, the lionfish, melaleuca tree and the dastardly Brazilian pepper, the focus of this article. I’ll get back to that in a paragraph or two.

It is important to note that according to the Florida Fish and Wildlife Conservation Commission, there are over 500 non-native fish and wildlife species and 1,180 non-native plant species in our beautiful state, many poised to do moderate to severe damage to native wildlife or the environment. To be a “native” means that the plant or animal historically occurred in Florida.

Thousands of non-native species have been introduced to Florida and (unbelievably) more arrive on a daily basis. (Check the myfwc.com site for great information on the wildlife of Florida.) As many as 40 exotic agricultural pests arrive here each month – WOW! Some come in the water contained in ships as ballast, some cling to the propellers, and some are borers into the wood of crates, but MOST non-native fish and wildlife are introduced here by pet owners who either release them or they escape from captivity. Remember Hurricane Andrew and the critters that escaped from the toppled enclosures in Miami and Homestead?

Brazilian pepper originated in Argentina, Brazil and Paraguay and rapidly spread in South and Central Florida. These trees and others cover 1.5 million acres of Florida, and they negatively affect the areas where it rapidly spreads. This tree, usually 15-30 feet in height, forms into dense forests which exclude all other plant life due to the density of its think canopy of leaves and branches. Other plants dwarf or die out due to the thick competition and lack of sun, and the resulting area becomes poor habitat for native species including birds.

Did you know that this attractive, but nasty, tree is related to poison ivy and poison oak? Dark green leaves with white flowers while blooming change to green berries that turn bright red in the fall (very holiday-ish) – you’ve probably seen them all over Florida and didn’t know they were such a problem. Use gloves and cover up during removal or chance an itchy rash that takes a long time to heal.

Enter Luke Larson and his Isles of Capri crew including Dave Beatty, Tim Larson, Evelyn Middlebrook and Paul Westberry on a recent work day to rid the world of the Brazilian pepper, and clean up paradise. These dedicated workers cut, chopped, sawed and hauled pepper branches out of the tidal marsh along the road to Isles of Capri and allowed the light to shine through to the magnificent mangroves that were struggling to survive.

These aren’t the only people who’ve helped; there are many participants who assist at the various planned work days. They work hard, sweat hard and are committed to a better environment. Even as they carved out more light, they noted the results of previous work days – the mangroves were sprouting new shoots and heading for the light.

Shown here, Brazilian pepper originated in Argentina, Brazil and Paraguay and rapidly spread in South and Central Florida. These trees and others cover 1.5 million acres of Florida, and they negatively affect the areas where it rapidly spreads.

Fun for All Ages with Social DistancingWhat the Heck is Sea Beaning and Why and How Do I Do it?Iconic Pelican Bend Restaurant on Isles of Capri Gets a Partial Makeover