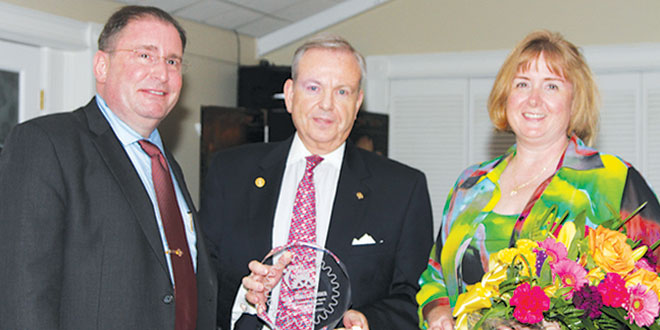 Exemplary commitment to public service was recognized and celebrated in an elegant fashion at the Noontime Rotary Club of Marco Island’s annual Gala Awards Dinner and Silent Auction.

Now in its seventh year, the festive event honors recipients of the club’s Spirit of Marco Island Award, which is presented to individuals and organizations who have demonstrated an unwavering dedication to benefitting the community through donating their time and talents, as well their financial support.

They were formally presented with their awards at the well-attended gala, held April 25 at the Bistro Soleil Restaurant in Old Marco. The event and the silent auction serve as a fundraiser for local charities and scholarships.

Hernstadt summed up the importance of the Spirit Award winners’ 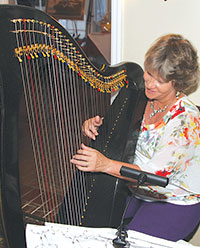 contributions with a quote from Mother Teresa: “I alone cannot change the world, but I can cast a stone across the waters to create many ripples.”

In business since 1979, Condee Cooling and Electric was selected for its many years of community service in support of the island’s civic organizations and events.

Over the years, Condee Cooling & Electric staff members and equipment have regularly assisted with such community events as Christmas Island Style, functions for the island’s Rotary and Kiwanis clubs, and those of the Greater Marco Family YMCA, as well as the annual Marco Island Seafood and Music Festival. The company has also supported the Marco Island Art League and two visits of the Vietnam Traveling Wall Memorial.

The recipients all addressed the audience after being presented with their awards.

Erik Condee, the company’s operational coordinator, said such recognition is greatly appreciated by the company and its employees. 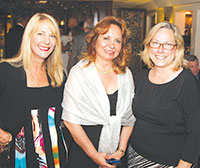 Goodland. She is also a board member with the Shelter for Abused Women and Children in Naples, and she has served on the Veterans Memorial Fund Raising Committee, the Traveling Vietnam Wall Committee and the original Big Flag Committee.

There are always needs waiting to be met, even in a prosperous community such as Marco, but there are also people here who dedicate themselves to helping meet those needs, said Roberts. After recognizing some of the civic champions in the audience, she said it’s their efforts that help inspire her actions.

Roberts shared the award with her husband, Steve, and also said she dedicates her involvement with veterans programs to her late father, Abraham Thompson, who was a veteran of WWII.

Cindy Love-Abounader is CEO of the Greater Marco Family YMCA and has been with the local Y branch for 20 years. She is an active member of the Noontime Rotary, where she is a past president and recipient of the 2008 Rotarian of the Year award.

During her Y tenure, Love-Abounader has been instrumental in

increasing funding for programs that support underprivileged children. The Y helps over 1,000 children a year through literacy and math summer camps, the YREADS program, Early Childhood Learning, after-school programs and many wellness and social services. In 2012 she was awarded the “Educational Commissioner’s Award” by the Florida Department of Education.

George Abounader has been the CEO/Principal of the MICMS for 16 years. He is also a past president of the Noontime Rotary Club and in 2013 was the recipient of the “Marco Island Citizen of the Year” award. In 1992, he received the “Edmund Rice Distinguished Educator” award.

Under his stewardship, Abounader has led the school to rank among the top 3% of Florida’s public middle schools and MICMS has received 14 “A” ratings and the designation of “High Performing Charter School.”

“When you think of George and Cindy, it’s all about the kids,” said Diaz in introducing them. “They are unselfish advocates for the children in our community.”

In her remarks, Love-Abounader said her father always told her to surround herself with good people,

a quality that she has found to be abundant on Marco.

“The people on this island are the greatest people I know, aside from my own family,” said Love-Abounader.

The Herrs were selected their 18 years of work with the Guadeloupe Center in Naples, where they’ve donated thousands of volunteer hours and been major financial contributors.

The Guadaloupe Center provides educational, social and other support programs and resources for the underprivileged. With the Herr’s support, the center’s Early Childhood Education, After School and Tutoring Programs have grown from 30-to-40 students and four-to-five tutors, to nearly 300 students and 170 tutors.

The couple has also been heavily involved, locally, with Habitat for Humanity for years.

Grace Herr urged people to visit Immokalee to get a sense of the reality of poverty in this country and its affect on children, such as those served by the Guadalupe Center.

The Snyders are the founding attorneys of The Law Offices of Hodge and Snyder on Marco. They were recognized for their work with Meals of Hope, a nonprofit that provides meals for 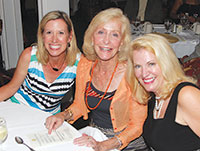 the underprivileged of Collier County. Under the couple’s leadership, the organization has raised money and held meal-packaging events that have provided nearly 800,000 meals for people in need over the last four years, he added.