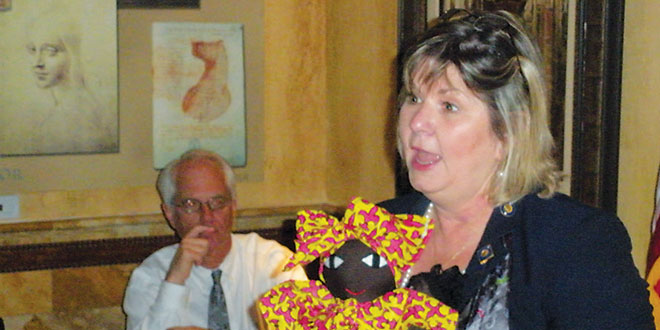 Cyndi Doragh was the special guest at a recent Noontime Rotary Club of Marco Island meeting.

Cyndi Doragh, governor of Rotary International District 6960, recently visited both of Marco Island’s Rotary Clubs to discuss the organization’s 2015-2016 initiatives, and to encourage the members to continue their efforts to both improve the lives of people in need and to better the communities the clubs serve. Stories on Doragh’s visits to the clubs can be found below.

The Rotary Club of Marco Island Sunrise
By Bill Morris

The district governor meets with each of the over 50 Rotary Clubs in the district at least once during the first six months of the Rotary year, beginning July 1. Marco Island Sunrise was honored to be one of the first clubs meeting with the newly installed governor.

The governor’s visit began with a board of directors’ dinner hosted by Sunrise Rotary Club President Debra Shanahan at DaVinci’s Restaurant. It was followed the next morning by the club’s weekly meeting, where Doragh was the guest speaker.

The district governor’s speech addressed Rotary International’s 2015-2016 theme, “Be a Gift to the World,” and how each Rotarian can be that gift. Doragh stressed that Rotary is about relationships. Rotarians like being together, working together and going out into the world. The common denominator is caring about our community.

The governor noted that our time on this planet 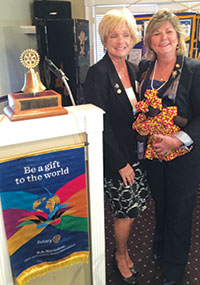 is finite, but that the power of one can make a big difference. Among many examples of the power of one, Doragh told the story of a doll she purchased at the Rotary International Convention in Sao Paulo, Brazil. The doll was made by one young woman in Kenya and purchased by one Rotarian in Sao Paulo. The funds are used to feed a multitude.

Doragh went on to relate the power of one to her three major projects for the coming year. First mentioned was “Coins for Alzheimer Research,” through which Rotary Clubs contribute their loose change and more to Alzheimer research. She explained that human trafficking is a problem in Southwest Florida that must be addressed, and she encouraged the involvement of Rotarians in that effort. She also emphasized Rotary International’s major project, the eradication of polio on a worldwide basis, was a priority. Only 29 new cases of polio were reported in 2014, and it is her hope that polio will be eradicated completely in the very near future.

In keeping with the governor’s speech, Shanahan announced that the club was making a $1,000 donation to the fight against human trafficking. And in appreciation of the governor’s visit, the Club donated 20 polio vaccines, in the governor’s name, to Rotary International.