Newly installed Rotary District Governor Ladd Waldo recently visited the Rotary Club of Marco Island Sunrise to share his vision for the new Rotary year. The Rotary year begins July 1, 2016, which means Marco’s Sunrise Rotary is one of the first clubs in Ladd’s district to share his program.

Ladd’s visit began with a dinner hosted by the Club, and attended by Ladd and the Sunrise Rotary Board of Directors. Ladd confirmed he wanted to continue the generous financial support of his district to the Rotary Foundation. Last year, the district donated more than one million dollars to the Foundation and its battle against polio.

Ladd shared his vision of Rotary as a dynamic organization, changing club presidents, governors and even international president every year. In most organizations, that much turnover would be an unhealthy sign. In Rotary, it is a sign of vitality and 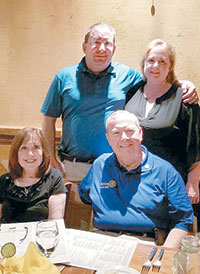 Ladd was the featured speaker at the Club’s weekly meeting the following day. He announced a new program of partnering with Veterans of Foreign Wars to arrange flags for businesses and residences. In conjunction with that partnership, he seeks to create a scholarship fund for returning veterans or surviving children of veterans killed in service. The program will operate under the name “Flags for Heroes.”

President Neil Snyder welcomed the District Governor enthusiastically. Snyder confirmed that Sunrise Rotary, affectionately referred to as the “Best Little Club in Rotary,” will continue to serve our community and be an active participant in Ladd’s programs during the coming year.