The Marco Island Rotary Club Sunrise members enjoyed their Annual Presidential Exchange of Banners at their recent meeting. Each year, Rotary International operates under a theme adopted by its president. The theme is published on a banner to be used by each Rotary Club. The Marco Island Sunrise Club has developed a tradition under which the outgoing president exchanges banner with the incoming president.

Exchanging banners is a Rotary tradition, and is often done when a Rotarian visits a club in another state or country. Presidential exchange is somewhat unique to the Marco Island Sunrise Club. Outgoing President Debra Shanahan symbolically exchanged the 2015-2016 banner theme “Be a Gift to the World” with newly installed President Neil Snyder’s banner 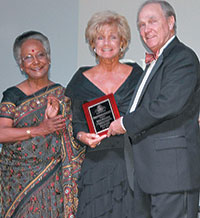 Debra Shanahan (center) is presented with the DistrictGovernor’s Award.

The presidents also recently attended the Rotary District Conference, where President Shanahan received the District Governor’s Award with Distinction. The District Governor’s Award requires all members of a club take part in at least one club fellowship event during the year, a project in community service, international service and vocational service and at least one project in new generations. The award also requires membership contribution to Rotary Foundation’s Annual Programs Fund and joining with at least one other club to share in successful execution of a service project. 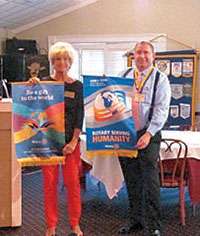 Debra Shanahan (center) is presented with the DistrictGovernor’s Award.

Incoming President Snyder has vowed to continue the club’s high level of performance and to especially focus on the addition of new members and new service areas.