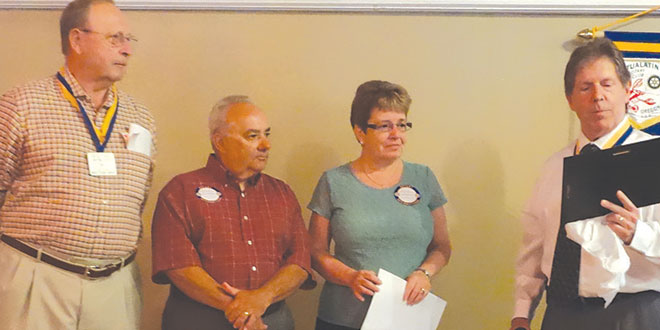 The Rotary Club of Marco Island Sunrise recently presented its Unsung Hero Award for Third Quarter, 2015 to Barbara and Carmen Dasti. The Dastis are recognized for their service to the Marco Island community and placing “service above self “consistent with Rotary’s aspirations.

Barbara and Carmen Dasti were nominated as the “keys to making Christmas Island Style work.” Barbara does all the bookkeeping and correspondence, as well as helping to get a new ornament design each year. Carmen takes care of the angels and the banners, including maintenance. When it comes time to work on the Christmas Island Style Golf Tournament, Carmen gets more hole sponsors than anyone else. They are not only a great couple, but also an invaluable part of the Marco Island community.

As the Sunrise Rotary’s Unsung Hero, the Dastis were awarded a plaque commemorating the recognition. In addition, the Club will donate $100 to the Golisano Children’s Hospital of Southwest Florida, as a charity chosen by the Dastis, and 20 polio vaccines will be contributed as part of Rotary International’s effort to eradicate polio.

The Unsung Hero award recognizes a member of the Marco Island community who unselfishly help others and who has not generally been recognized for such service. The recipient is not a member of Rotary, but either works, lives or provides service on Marco Island. The club is now accepting nominations for the fourth quarter Unsung Hero.