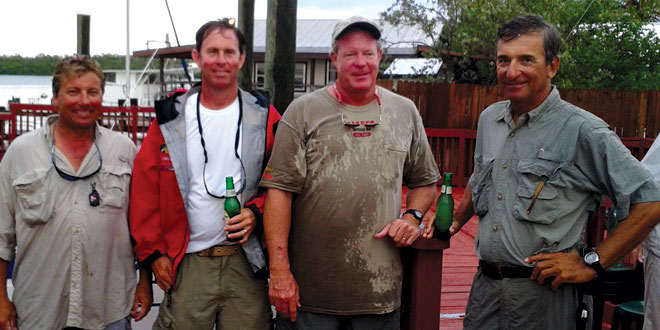 The Rootin’ Tootin’ Red Grouper Tournament may go down in history as one of the longest tournaments in Marco Sportfishing Club history. Due to weather delays, the scheduled awards ceremony ended up being a “kick off” event and took place on Monday night, April 15th with the “fishing day” of the tournament taking place on Tuesday, April 16th. After 2 weather delays, 19 boats and 80 anglers finally got the chance to go out and bring back some red grouper. The tournament had two separate divisions…a 15 mile division and a 50 mile division, with the weigh-in at the Old Marco Lodge in Goodland held right after the full day of fishing.  The weigh-in started out slowly, but just as the anglers started arriving with their fish, a 30-minute downpour put the festivities on hold. When the rain cleared, the weigh-in resumed and some really nice fish were brought to the scales. Since no wildcard fish (King Mackerel) were caught, a 4th place was awarded in each division.

Winners in the 15-mile division (one legal red grouper) were:

Winners in the 50-mile division (two legal red groupers) were:

Captain Mike Muller and his crew also went home very happy. Not only did they win their division…they also won the Captain’s Calcutta in the 50 mile division.

Walker’s Marine, Mercury Marine and Pursuit Boats were sponsors of this tournament. With their help and financial support, this event continues to grow in popularity each year.

The Marco Sportfishing Club is a non-profit organization comprised of more than 325 fishermen, boaters and outdoor enthusiasts who live in the Marco Island, Fl. area. In addition to enjoying all types of fishing-related activities, the Club prides itself in its ability to “give back” to the community. Members of the club are active and involved in the community and have been instrumental in organizing and staffing many events that teach local children the joys of fishing and good fishing etiquette. For additional information, please visit the Club’s website atwww.marcosportfishingclub.com