Room with a View… the Amalfi Coast 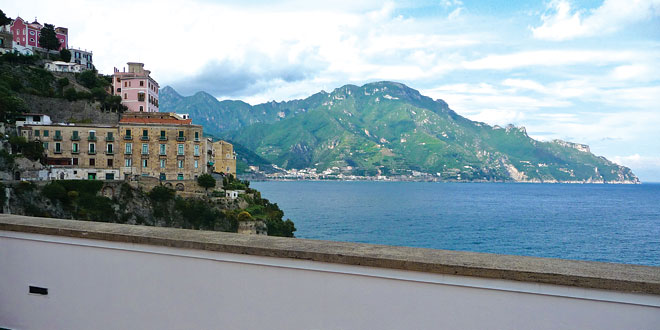 On the Amalfi Coast, Atrani, the second smallest commune in Italy, is just a blink of an eye bus ride from the much touristed town that gives the area its name; in many ways it is a world away and it is where we choose to rent an apartment for a couple of weeks. It was a perfect choice. Atrani once housed the most noble families of the Amalfi Republic. It was where doges were crowned and buried. In later years, it became home to fishermen and one can still see the lampras or lights of the night fishermen.

Founded by Etruscans, with a church dating to 940 and a population of less than 1000, the residences in Atrani climb down from the cliff to spill out over the sea. It is resplendent with gardens, fragrant lemon groves, courtyards, and stairs, many stairs, including some that lead 1200 feet up to the town of Ravello. The white washed buildings with narrow flower bedecked stairs and alleys are somewhat reminiscent of the old Arabic quarters in Andalucia, Spain, but have a character all their own. Many of the structures appear to be built right into the mountain. Hovering above are stalactite dripping caves and everywhere, lemon trees.

The wee town square, Piazza Umberto, is ringed by cafes frequented by locals with children often playing in the middle. We chose Atrani not only to be away from the hustle and bustle of the busier towns, but because our apartment was right above the water with an incredible view….the sea, the mountains, and, on one side, the main church, Santa Maria Maddalena, built in 1274. On Sunday evenings, we were serenaded by the various choir practices. We called our terrace the “infinity terrace”; it jutted out over the road with the visual effect of vanishing off into the sea.

Some people claim to experience Stendahl’s syndrome in Florence, overcome by the beauty of all the art that is there. Before traveling to Atrani, we had spent a week in Florence. Yes, there was beauty, but it was our third time there and we have seen alluring art in many places. My first morning wandering about Atrani, discovering hidden jewels such as a waterfall with ducks frolicking in its pool, the beauty was entrancing and I think I experienced 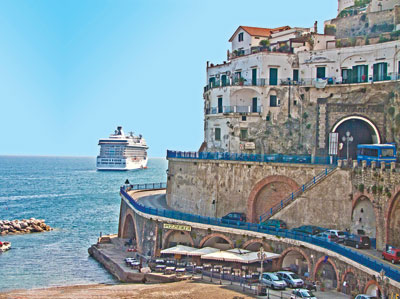 my first touch of Stendahl’s.

I loved walking the maze of stairs and if I lost my way, I just listened for the sound of the surf to orient myself. I loved that I could always tell the time by the church bells that rang every fifteen minutes. A weaker bell one, two or three times for the fifteen minute intervals after the hour and stronger bells ringing out the hour. Yet they weren’t intrusive. I had to consciously listen for them and not once did they wake us up.

There are a few shops in Atrani including the Pescaria of the Doges (fish store), a cheese shop, butcher shop, a fresh produce store, and two small convenience stores. And, of course, the local “gentleman’s social club”. In a dark hovel of a garage, morning, noon and night, the doors were open and inside a group of local men could be seen seated around a table adjacent to the cars playing cards.

There are four major restaurants in Atrani and three cafes. The first night we went to La Palme restaurant. Our waiter greeted us with a complementary aperitif, the house specialty. After a dinner of peppered mussels with lemon, the freshest and most tender we have ever tasted, and spaghetti in clams for me and ravioli in squid sauce for my husband, we turned down dessert. Yet, our waiter brought us a complimentary chocolate concoction that we had no problem scarfing down. It was heaven! Followed by local green lemoncello (made from lemons before they turn yellow) on our infinity terrace, it was a perfect introduction to this welcoming town.

Early one morning I set out on the path up to Ravello. I walked through farms and endless lemon groves, past a waterfall and houses built into the mountain and I encountered a wizened old man with double canes. He asked, in Italian, if I was walking to Ravello. I told him, no, only a morning passeggiata. Continuing in Italian, for he spoke no English, he told me all about the Valley of the Dragon as the area is called, pointing out the ancient church high in the mountain and the stalactites of the nearby grotto. He told me what they were called in Italian, I told him the American name. He reached into a cloth bag he was holding and, with a 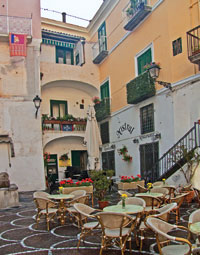 big smile, presented me with a huge lemon with fresh leaves still attached. Che una bella mattina! What a great morning it was!

The main bus line along the coast stops in Atrani and from there we were able to easily access all of the major towns and tiny hamlets of the Amalfi area, as well as those inland and the islands along the coast. I have friends who have driven the Amalfi Coast highway and I salute them. Taking the buses was enough of an adventure for me. It certainly is not for the feint hearted. I do have to compliment the professionalism of the drivers. It amazed us how they were able to negotiate the narrow hairpin turns, especially when encountering a tour bus coming the opposite direction. On our way to Sorrento one morning, in the middle of the country side above the coastline, an alarm went off on the bus. My husband reminded me it was the same sounding alarm as the one that goes off on our boat when something is overheated.

We continued until it was safe for the driver to pull over. He opened the back of the bus from which smoke was pouring. He very calmly fiddled around and then started carrying bottles of water from a nearby roadside restaurant seemingly in the middle of nowhere and pouring them into a tank in the back. As water began to soak the street below, I knew that wasn’t going to work and wondered if we would ever get to Sorrento. About 20 minutes later, an out of service (fuori servizio) bus pulled up, we transferred and continued safely on our journey.

After a day negotiating the larger towns on the coast, it was a pleasure to return to Atrani. It was a minor inconvenience to go to Amalfi for the major bus and boat connections north of that town, but, the peace and quiet and the view was so worth it.