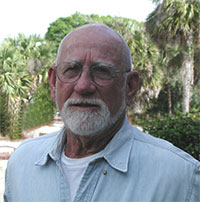 Ted Below has logged more than 9,000 hours of volunteer service

Ted Below, a long-time volunteer at Rookery Bay National Estuarine Research Reserve, was recognized by the Collier County Commission on Dec. 9 for his dedication to the study of birds and the protection of their habitats in south Florida.

Following his tenure as National Audubon Society warden at Rookery Bay, Below continued his efforts to monitor pelicans, wading bird rookeries, osprey nests and beach-bird nest colonies. He conducted his work as both a paid employee of the reserve and also as a volunteer, often regardless of weather conditions. It was this determination that encouraged Gary Lytton, director for the reserve, to nominate him for national recognition in 2001 as one of NOAA’s Environmental Heroes. Earlier this week, on his 90th birthday, Below was presented a proclamation prepared by his colleagues at Audubon of the Western Everglades.

Below has logged more than 9,000 hours of volunteer service at Rookery Bay Reserve, shares his library of bird photographs he has taken, and continues to provide lectures about the birds he studies. Perhaps his biggest accomplishment is his long-term database of avian populations.

“It is astounding in the world of wildlife research to have a 40-year-long record of coastal birds in southwest Florida,” Lytton said. “There may be some individuals who are equal to Mr.Below in dedication and service to the environment, but there are none who surpass him.”

Below will present his findings on least terns during the Southwest Florida Nature Festival at Rookery Bay Environmental Learning Center on Jan. 17.

Rookery Bay National Estuarine Research Reserve encompasses 110,000 acres of coastal lands and waters near Naples. It is managed by the Florida Department of Environmental Protection in cooperation with NOAA. For more information visit www.rookerybay.org.