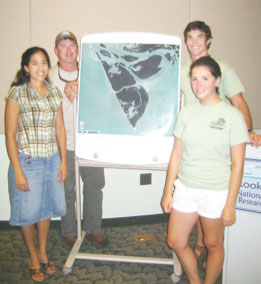 In a presentation held at Rookery Bay on August 10th, summer interns presented information regarding the sea turtle nesting habits on and around Cape Romano. Known for its “bubble house,” Cape Romano is a part of the Ten Thousand Islands chain. Along with Cape Romano’s beach, Morgan Beach, Blind Pass and Kice Island were also a part of the study. Interns Sarah Flickinger and Andy Fallon not only analyzed Loggerhead Sea Turtle data in this area but they also monitored these areas daily for the presence of sea turtle nests and other activity.

Since 2002, the Rookery Bay National Estuarine Research Reserve has been responsible for monitoring sea turtle nests on Cape Romano and its surrounding areas. Two years ago interns were brought in to take over the summer monitoring of these nests. For nine years data was collected regarding the location of nests as well as the number of nests, eggs that hatched, eggs that didn’t hatch, nests that were destroyed, false crawls and much more. Unfortunately, Rookery Bay has never had a chance to actually analyze the nine years of data. That is, until Sarah Flickinger and Andy Fallon came along.

Sarah, a recent graduate of Vassar University, and Andy, currently a junior at the University of Massachusetts, arrived in Southwest Florida at the end of their school year and immediately began monitoring for sea turtle nests. As nesting season begins in April and runs through September, the monitoring was already underway by Greg Curry. Curry, Resource Management Specialist at Rookery Bay, became Sarah and Andy’s Field Supervisor, teaching them everything there is to know about sea turtle behavior and monitoring.

The two interns stayed in Goodland at the Rookery’s Ten Thousand Islands Field Research Station. Using a boat provided for them, they would take the short route each morning to monitor any sea turtle behavior. Self-release cages were placed over any nests that were found as the raccoon who live on Cape Romano consider sea turtle eggs to be a delicacy. Empty egg shells were counted to get an idea of how many hatchlings made it to 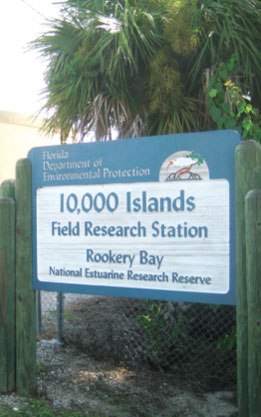 sea. Data was also collected daily pertaining to any other sea turtle activity.

The second task for the interns was to analyze the data collected from 2002 to 2010. Victoria Vazquez, Research Coordinator at Rookery Bay, supervised the data analysis process. During the presentation, Sarah Flickinger not only discussed the general habits of sea turtles, but also presented the data from 2002 to 2007. Sarah explained that “Florida is actually the most important Loggerhead nesting site in the world. It has the highest concentration of Loggerhead nests and additionally 91 percent of all the Loggerhead nests (in the U.S.) are located in Florida.” As Loggerhead turtles are an endangered species, this fact makes analyses of their nesting patterns extremely important.

Flickinger found that between 2002 and 2007 many changes were made to the monitoring of the nests that made it more difficult to draw many conclusions. For example, in 2002, the areas in and around Cape Romano were only monitored two days a week. Also, they only began using the self-release cages in 2006 and only in high risk areas. One of the conclusions drawn, however, was that the use of cages was certainly helpful. “In 2006 and 2007 the degradation rate drops to below ten percent from up around thirty and forty percent. That coincides with using the cages. That to me signifies that the cages are the more effective technique for protecting the nests.”

Other information found was that sea turtle “emergences,” or any time sea turtle tracks are seen on the beach, tended to be in a cyclical pattern. For example, 2002 and 2003 showed higher rates of emergences and nests, with a drop-off following the next two years, with 2005 having the lowest number of emergences. The sea turtles also had a definite preference in beach choices as well. The highest concentration of nests over the six year period was found on Morgan Beach, followed by Kice Island, Cape Romano and the least favorable being Blind Pass. These patterns fall in line with known facts of sea turtle behavior. Female sea turtles only nest every 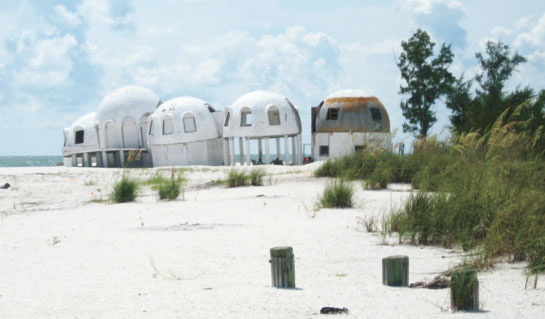 two to three years and normally lay an average of 3.9 nests. They also return to the same area to nest which is also the same area where they were born.

Andy Fallon’s study of years 2008 through 2010 proved to be a bit more consistent. By 2008, all nests were being caged in these areas and monitoring also took place every day. This ensured more accurate data. Fallon’s results showed that “Morgan Beach is a clear favorite among sea turtle populations and nesting but it is somewhat unclear why.” Theories behind the popularity included the ideas that offshore sandbars may help channel the turtles to this area. It is also located at the western most tip of the island itself. Another thought by Fallon was that, “the turtles who nest here have very precise natal homing. They may have been nesting here for hundreds of years… With more years and more information we could probably get a better idea as to why Morgan Beach is so successful.”

With the analysis also came recommendations. Sarah and Andy found that the biggest problem in the area was the raccoon population. This could be due to the increased human traffic in the area and garbage being left behind. One idea, according to Andy, was to attempt to control the degradation of the nests by the raccoon population by “doing an early significant removal of raccoons from the complex before the nesting season gets under way. In early April or May would be ideal.” Other suggestions were to add a protective barrier around a caged nest that may be close to the tide line and to keep a weather log to help understand the inundation of each nest better.

With Sarah and Andy’s internships coming to an end, their work and advice has been well-received by Rookery Bay. Cape Romano and its surrounding beaches will continue to be monitored by new interns in the coming summers. It is both Sarah and Andy’s hope that with more data, many more conclusions can be drawn and mysteries solved regarding the nesting rituals of Loggerhead sea turtles in South Florida.