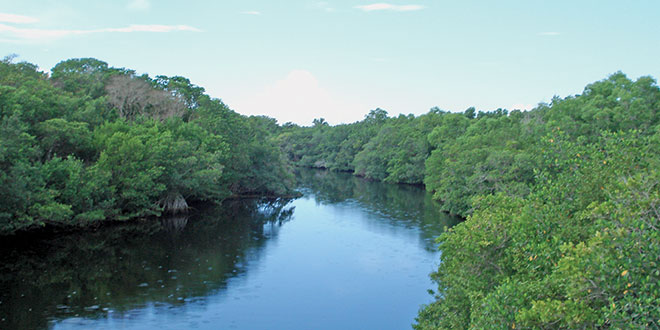 A view of Henderson Creek from the observation bridge. Photos by Maureen Chodaba

An estuary is a special place where two worlds collide and combine to create a unique habitat and environment. They are a brackish transition zone between the fresh water of a river and the salt water of the sea, serving as a coastal bay nursery for fish and other marine life. In 1972, Congress established the National Estuarine Research Reserve System (NERRS) to promote education and research of our estuaries while encouraging communities to be better stewards of the coast. Today NERRS is a network of 28 different estuaries around the United States, managed by the National Oceanic and Atmospheric Administration (NOAA). Each year on the last Saturday in September, the system celebrates National Estuaries Day. Our local Rookery Bay Reserve celebrated this special day with a fabulous event. 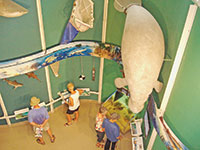 guided boat tours and junior science research labs. The boat tours each began with narrated bus transportation, generously sponsored by the Marco Island Shell Club, to the center’s boat dock on Shell Island Road. One of the guided tours was narrated by Gary Lytton, former director of the Rookery Bay Environmental Learning Center and current executive director of Friends of Rookery Bay, the 501(c)(3) non-profit organization that supports the Reserve. Lytton shared his abundance of knowledge along the tour, defining and highlighting many points of interest. A monument stands on the bank of Henderson Creek in recognition of the efforts of school children who raised funds in the 1960s for the purchase of lands around Rookery Bay.

“There is safety in numbers,” stressed Lytton as he defined the word “rookery.” A very robust rookery is a place where colonial nesting birds like snow 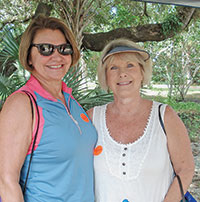 Austine Frawley (left) and Jaye Spencer are ready for adventure!

egrets, blue herons and spoonbills live in harmony making their nests. We see the rookeries as mangrove islands in our bay as they provide protection from snakes, raccoons and other predators that prey upon bird’s eggs. The red mangroves are uniquely adapted to surviving storms and hurricanes. The decomposition of their leaves in the water provide food and protection to baby fish. The waters of Rookery Bay truly serve as a nursery of nature!

We saw several ospreys perched atop the channel markers. Also known as fish hawks, they are extremely efficient at catching fish with their talons. American Bald Eagles also soar above the Rookery, sometimes waiting for an osprey to catch fish and then zeroing in on the catch like a fighter jet.

In pointing out the sand pines along Shell Island Road, Lytton explained the importance of fire as a natural 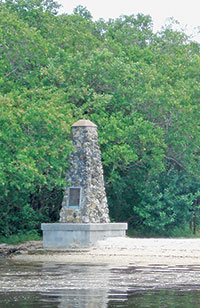 The monument in Henderson Creek.

part of the ecosystem. Most fires in natural areas are caused by lightning strikes. In some cases, it is necessary to enhance this activity through the use of prescribed fire, or controlled burns to maintain suitable habitat for natural vegetation and wildlife.

Sightings of manatees, dolphins and living oyster reefs add to the beauty and marvel of these 110,000 acres and 30 miles of shoreline known as the Rookery Bay Reserve. But don’t wait until the next National Estuaries Day to explore it for yourself. The Rookery Bay Environmental Learning Center welcomes you with the greeting that it is, “Yours to explore, yours to enjoy and yours to protect.” The center offers aquariums, a marine life touch tank, a nature store, art gallery, observation bridge, nature trails and interactive exhibits. Guided kayak and boat tours are offered in November through April. For more information, call 239-530-5977 or visit rookerybay.org.