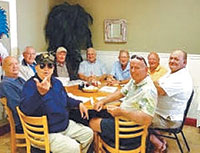 If you’re out for lunch on any Tuesday here on Marco and see eight or so men gathered together, chances are they are ROMEOs. Wherefore art thou, ROMEOs? It is the acronym for Retired Old Men Eating Out, coined by Fred Stavola, the group’s social engineer. Every four months, Fred determines the restaurant schedule for the lunch bunch and distributes it to the members. Their lunch spots are rotated, with no place being repeated consecutively within that four-month cycle. Variety is the spice of life, after all.

Most of the men met initially through the Marco Men’s Club and have known each other for almost two decades. The ROMEOs have interesting and varied backgrounds. Bernie Patynski is a retired school principal, Ron Moores was a British fighter pilot who served in the Suez Crisis (mid 1950s) and has been active in The Marco Players for some time now. Frank Caricato is a retired accountant. A relatively new member of the group, John Miniutti, was a Palmolive engineer in R&D and other areas.

There are three brothers in the group, Norman, Dominic and Robert Terreri. If Norman Terreri sounds familiar to you, you may have seen a performance by the Marco Island Strummers. Norman is a founding member of that musical group, one of the 6-string banjo players. If you missed the Strummers prior performances this season, you can still catch them for their final at 11 AM on May 30, 2016 at the Memorial Day Observance at Veterans Park. Norman divides his time between Marco and the North, but Robert and Dominic are both year-round MI residents. All three brothers had long tenures in their occupations with Dominic owning a bar for 45 years, Robert working for a Carpenters Union in New Jersey, while Norman worked for a utility company.

Sal Sciarrino, friend of Coastal Breeze, Marine and retired detective, introduced us to his lunch group. Thanks to him and to the ROMEOs for graciously allowing us to meet up with them recently at CJ’s. It was a pleasure to meet some of the interesting people who make Marco a nice place. To anyone wondering about the wives of the ROMEOs, I was assured they enjoy lunching out with their own groups!