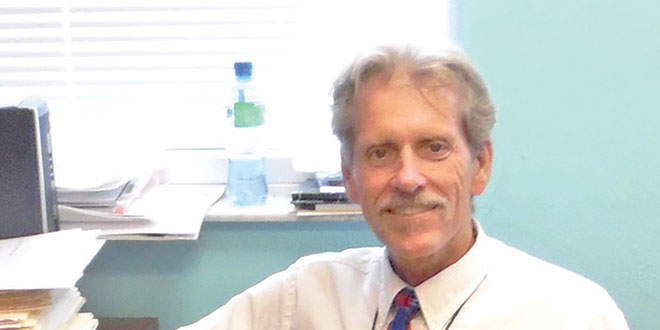 Roger and Karen Raymond went from having a band to owning a music store, when Roger was asked if he would be interested in serving as athletic director for a new school opening in 1998.

Roy Radlovacki and John Pike had children enrolled and wanted to get a sports program going at the Marco Island Charter Middle School.

The Raymonds had lived on Marco, part or full time, since 1984. They completed their time as the house band at the Marco Marriott in 1994 and bought a music store. It was named Morningstar music, just like the band.

“Guess they thought that because I coached in Indiana, where basketball is king, I would be a strong candidate,” Raymond said. “I didn’t know what a charter school was.”

They kept calling and he decided to go to a meeting to discuss sports for the new school.

“I went to the meeting and there were more than 40 people there,” he said. “I thought that was an impressive number. I applied and got the job.”

Then started the tough parts: suggesting the sports that could be started in the first year and raising money for those programs.

“The school could not support the program financially, it had to be through donations,” Raymond said. “Roy Loyacono gave the first donation, $250. However, each board meeting the treasurer would read off financials and we would be at the same, $250. We got donated uniforms and made do the first year,” Raymond said.

In the first year Raymond established girls and boys soccer and girls and boys basketball. Collier County had no middle school track or cross country program. It only ran one track meet a year that any school in the county could take part.

To build the sports program money had to come from somewhere.

That’s when Raymond began taking the 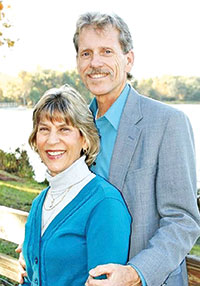 program to another level. Raymond found schools that were just fielding teams and made up a schedule. It included cross country, basketball, girls volleyball and track.

“It was difficult for track because we had nowhere to practice,” said Raymond. “Amazingly we were able to win the Collier County Athletic Conference track championship more than once.”

Then came baseball, followed by boys volleyball, golf and tennis.

“We became known for our cross country teams,” he said. “We won 77 invitationals over 15 years.”

Raymond credits Mark McGarity, Lely cross country and track coach, with much of his success.

“Whenever I had questions he had answers. What I learned from Mark made a difference on how I approached coaching. He is an incredible individual,” Raymond said.

McGarity was emotional when talking about Roger at the Raymond Going Away Run to honor the Raymonds on August 28.

“I’ve known Roger since we ran in races together more than 20 years ago,” he said. “His daughter Jessica was a big part of our cross country team that came in second at state in 2002. We saw many kids grow through running. It changed their lives.”

McGarity talked about his friendship with Roger and Karen.

“You know, it is about having friends that you don’t always see, but are always there for you,” he said. “I think in time the school and community will realize what awesome people they are and the legacy they leave behind.”

“We had a really good baseball team for a while, but we ran out of competition as county middle schools don’t have baseball and the private schools began using their eighth graders for varsity,” Raymond said.

Public schools can only use athletes from grades 9 through 12 for varsity sports. 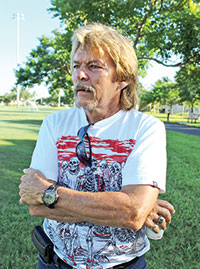 An emotional Mark McGarity at the Raymond Going Away Run.

the Charter School was built. The basketball team began practice at Mackle Park and on the YMCA indoor court at 5 AM.

Fundraising was helped by having concession stands at games.

“Basketball did well as people formed a ring around the outdoor court,” he said. “On Community Nights for basketball and volleyball we would draw 300 to 400 people.”

Raymond hauled the ever-popular popcorn machine everywhere. He also brought the public address system and music for each event, provided through his music store.

Raymond is a believer in coaching by example. Raymond said athletes knew that he ran the Boston Marathon.

“They knew too of my running every day. My rule was ‘I won’t ask you to do anything that I wouldn’t do.’ They knew I was willing to pay the price to be my best. It wasn’t all about winning, but doing their best.”

“Roger is one of the hardest working, most dedicated people I have ever met,” Watt said. “He established the athletic program at MIA when there were only 68 students and a handful of student athletes. He played an important role in the hiring of Kelly Monnot, who is the current Athletic Director and Dean of Discipline at MIA. Six short years later and MIA has 230 students and a flourishing athletic program. Roger is leaving a legacy here. He dedicated his life to serving the children on this island.”

When the Raymonds announced in mid-August they were leaving, a Raymond Going Away Run was held. More than 100 attended, following Roger in his last run at Mackle Park, a cross country site for the Marco Island Charter Middle School and Marco Island Academy.

Patty Poling, whose children Rosie, Mickey and Ellie, have experienced Raymond’s coaching style, put together a scrapbook. It included many photos and notes from his former athletes and parents.

Gage Wheeler benefited from Raymond’s coaching and philosophy. Two years ago Wheeler was the Winged 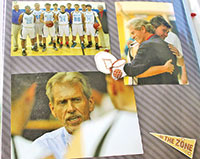 A page in a scrapbook made for Roger and Karen Raymond shows varying emotions he showed with his players.

Foot candidate as the Lely High School’s top student athlete. All schools in Collier County select one candidate each for the honor of being the best of all competitors.

Wheeler wrote in the scrapbook how Roger had been an influence on him as early as 13. He, like other basketball players, shirked at having to be at the YMCA by 5 AM. However, he said “to wake up at such an unusual hour helped shape myself into a self-disciplined individual.”

He also spoke on how Roger and Karen had an impact on him.

“The Raymonds showed me how beautiful life could be. As a couple they were always sharing their experiences. Whether it was her keeping the stat sheet at basketball games or him working as a tech for her shows. They always went the extra mile for each other. Their relationship became the basis for how I treated family, close friends and even new acquaintances. I can only imagine the total impact you have had on the lives of all the children you have met and one day I hope to do the same.”

Another outstanding athlete, Christie Thorstenson, now at the Air Force Academy, also spoke of how the Raymonds impacted her life.

“Cross country was my first competitive sport (at Marco Island Charter Middle School) and under your coaching I laid the foundation for a work ethic that I have used ever since,” she said. “You both were genuinely interested my growth. The determination, perseverance and resilience and athletic skills I learned allow me to be able to compete with other cadets. You have set me on the path I am currently on. I know I am where I am supposed to be and feel that I have you two to thank.”

The list of athletes that went to Marco Island Charter Middle School could be a Who’s Who for their success in high school and life.

When asked how he would grade himself on how well he did over the years, Raymond said, “If you just look at victories we did well and the program has come a long way. Guess time will tell. It certainly was a time when lives were shaped and I am happy for that.”