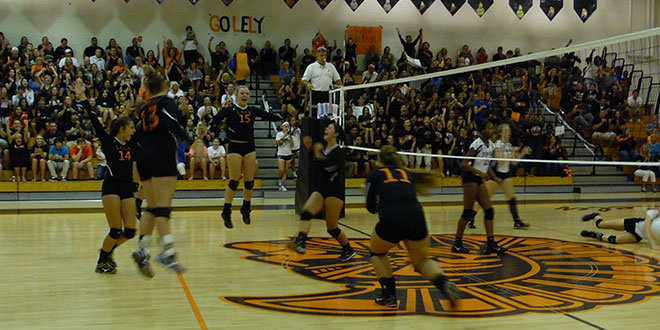 The Lady Trojans celebrate an early score in the Class 5A Regional final at Lely on Tuesday, Oct. 3. Unfortunately they couldn’t hold the momentum, losing three straight games to Tampa Robinson.

The team that makes the fewest mistakes wins.

That sums up Tampa Robinson sweeping Lely in the Class 5A regional final on Tuesday, Oct. 3.

Lely jumped out to a 4-0 lead in the first game. That would be the last time it led in a game until late in the third game, but Robinson came back to finish off the Lady Trojans, ending their season, again without winning a regional championship.

It was a bitter loss for a team that thought they would finally end what has seemed like a curse.

With service problems and mistakes 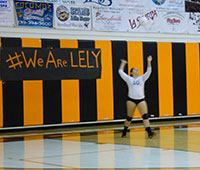 Samantha Baron serves for Lely in the third game of the Class 5A regional title match, won by Tamp Robinson in three straight games at Lely on Tuesday, Oct. 3.

in communication, the Trojans couldn’t get untracked.

They played inspired at the start of the match, scoring the first four points, but a service error ended the run. Robinson ran off eight straight points and did not relinquish its lead.

The Lady Trojans got within two at 16-14 then Robinson ran off seven straight and closed out the first set for a 25-15 win.

Runs of four and eight points put Robinson in a comfortable 15-6 advantage in the second, winning 25-12. 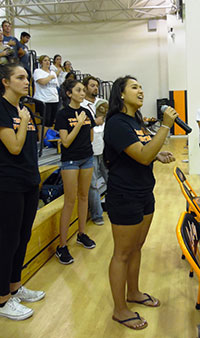 win four service points as her team rallied around the momentum change.

Lely tied and took the lead, 19-18, forcing a Robinson time out.

The teams swapped points until Robinson ran off the final four for a 25-21 victory.

The team, the packed Lely gym, went silent. It had happened again.

Lely Coach Chris Haire talked about the team playing through adversity, having four coaches in four years. The coach and team believed this time was when it all would change, but didn’t.

“This one game does not define the team that we are and the heart that they have. 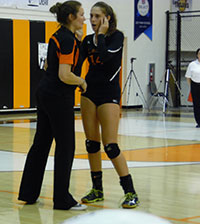 Chris Haire, Lely volleyball coach talks to Katie Moss during a time out in the Class 5A regional title game at Lely on Tuesday, Oct. 3. Tampa Robinson won three straight to again stop Lely at the regional final match.

The senior class has really led this team to a new future. They’ve set the tone and they need to walk out of here with their heads held high.”

“This team was the strongest it has ever been,” she said. “It was a blessing how the seniors set the tone. I am heart broken. I know we could have done better, I know we should have won.”

It was the third straight year that Robinson had derailed the Trojans as they sought a regional title.

Wait ‘til next year was not what the Lady Trojans wanted to face.