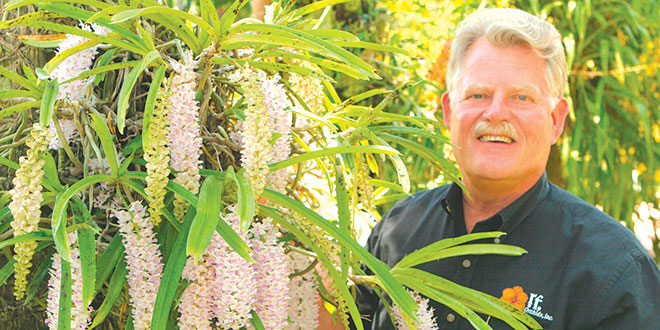 Bob in his garden with a specimen Rhynchostylus retusa. SUBMITTED PHOTOS

Orchid lovers are invited (at no charge) to come hear Fuchs’ presentation about name changes in the vandaceous alliance and what that means for current hybrid genera. His presentation, “What’s In a Name?”, was the keynote address at the 21st World Orchid Conference in Johannesburg, South Africa, in September. During that event, Fuchs received a Gold Medal from the South African Orchid Council for his achievements and for bringing AOS judging to South Africa.

In 1970, Fuchs opened R.F. Orchids on the grounds of his grandparents’ nursery in Homestead, Florida. When the 11th World Orchid Conference came to Miami in 1984 with its prestigious orchid show, Bob entered plants that subsequently won 12 individual medals along with a “Best in Class” trophy for an exhibit. Most importantly, R.F. Orchids’ plant Vanda Deva “Robert” was honored as the “Grand Champion,” an award that catapulted 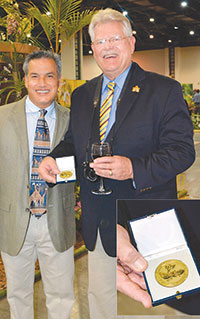 Michael Coronado and Robert Fuchs, both of R.F. Orchids, after Bob received a Gold Medal from the South African Orchid Council at the 21st World Orchid Conference.

R.F. Orchids into international recognition and acceptance as one of the leading vandaceous orchid firms in the world.

Another highlight of the evening will be the Monthly Exhibition Judging, where Alliance members participate as exhibitors as well as judges, winning accolades for beautifully grown plants. An orchid raffle will be held, and orchids from R. F. Orchids will be available for sale.

The 501(c)(3) non-profit Gulf Coast Orchid Alliance was formed in 2012 to promote interest in orchids, focusing on orchid education, community outreach and orchid conservation; and brings people together in an enjoyable, inclusive atmosphere.