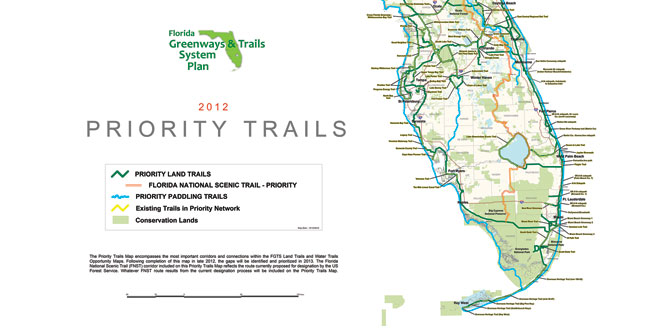 In an effort to develop a statewide trail and paddle system, the Florida Department of Environmental Protection (DEP) and Division of Recreation and Parks recently updated the overall vision for the Florida Greenways and Trails System (FGTS). The new five-year plan lists the River of Grass Greenway as a priority.

In early fall, the Division of Recreation and Parks launched the new plan, calling for public comment on what specific trails and paddle ways should be considered areas of initial importance. After hosting six public meetings throughout the state, opportunity and priority maps were developed. This is the first new plan since the inception of the FGTS in 1999.

The new vision is to utilize “existing, planned and conceptual trails and ecological greenways to form a connected, integrated statewide network. The FGTS serves as a green infrastructure plan for Florida, tying together the greenways and trails plans and planning activities of communities, agencies and non-profits throughout Florida.”

The River of Grass Greenway (ROGG) would run parallel to the Tamiami Trail, connecting the Naples/Marco area to Miami. The pathway would also bear south for three miles to include Everglades City. Plans are for a hard-surfaced, 12-14 foot wide corridor that would be separate from the highway and would allow for bicycling, walking, bird watching, photography, fishing and an overall enjoyment of the nature of the Everglades. Initially developed by the Naples Pathways Coalition, a volunteer organization, the River of Grass Greenway would 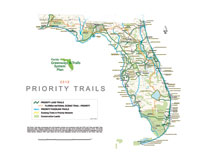 extend more than 70 miles through the Everglades.

Although the River of Grass Greenway has been defined as a priority, establishing and connecting routes along the FGTS relies on the collective effort of many programs and partners. A single trail project alone can require significant effort to complete, a fact that the Naples Pathways Coalition is all too familiar with.

A portion of the ROGG was given the number one priority for a Transportation Grant in the Spring of this year by both Lee and Collier Counties. Each year, the Florida Department of Transportation publishes its five-year work plan and it was expected that the River of Grass Greenway would be among the top priorities. Unfortunately, the ROGG was left out of the five-year plan completely when it was reviewed at the December 14 Collier County Metropolitan Planning Organization (MPO) Board Meeting.

Over 70 emails were sent to the MPO requesting to turn down the DOT’s five-year plan unless the ROGG was included. In what was considered a partial victory, the plan will be reworked and reviewed at the June 2013 MPO Meeting. MPO Executive Director Lucilla Ayer suggested that the ROGG be given high priority since there is broad community support for it and because both the Lee and Collier MPO’s agreed that this project should have the number one priority in receiving the Transportation Enhancement Grant Funding.