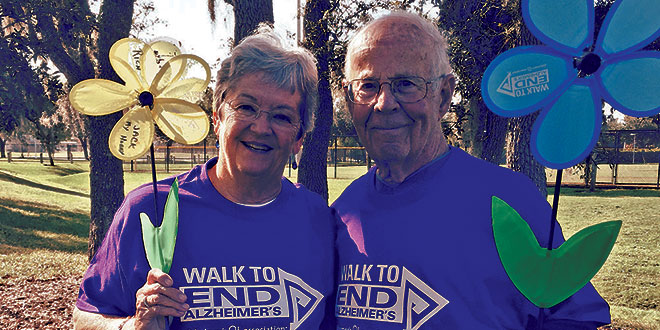 After hearing about Alzheimer’s disease from family, friends, or the media, we all might start to wonder about our own memory. Several years ago, I visited Bill Beckwith, a neuropsychologist then in Naples, to find out whether my brain was showing any signs of decline. After an initial visit, I was evaluated during two sessions of two hours each, and at the final visit, Beckwith told me the results. He had tested my memory with remembering lists of words, numbers forward and back, stories, and drawings. There were also timed exercises, questions about current events, history, and math plus a spatial exercise of copying small tiles in various configurations.

The experience was challenging but I needed to know whether my memory was faltering. Since my mother had Alzheimer’s, I knew my chance of getting it was a little higher than those with no family history. Perhaps you, too, have a family member with memory loss and wonder about your risk.

Online I found the Alzheimer’s Disease Genetic Fact Sheet which explains why Alzheimer’s is so complicated. We inherit our DNA from our families, have 30,000 genes, and even a slight mutation of one amino acid in a gene can cause problems. Check out: Alzheimer’sDiseaseGeneticFactSheet/www.nia.nih.gov/alzheimers/…/alzhei

In some families there is a rare mutation giving its members up to a 50% chance of developing early- onset Alzheimer’s where symptoms develop in their 40s and 50s. These make up less than 25% of all Alzheimer’s disease cases.

The rest are late- onset Alzheimer’s and risk for these depend on susceptibility factors and whether we’ve inherited the good, APOE2, the neutral APOE3 gene, or the APOE4 which elevates the risk for Alzheimer’s. If we’ve inherited one APOE4, it’s a susceptibility factor according to Dr. John Hardy of the National Institute of Health, with two, another factor. But having these genes does not guarantee one will get the disease which is one reason tests for APOE4 are not standard procedure. The risk can also depend on environmental factors, as well as genetics. If we have five or ten of these susceptibility factors our risk is increased.

The highest risk factor for Alzheimer’s is advancing age. The risk doubles every five years after 65 until at age 85, almost 50 percent of the population will have the disease. So, since we’re all aging, let’s hope there’s a breakthrough in prevention of this debilitating disease very soon.

While I do have a risk factor for getting Alzheimer’s, Dr. Beckwith’s evaluation calmed my fears. He saw, “not a shred of evidence to suggest I was starting to show signs of Alzheimer’s.” What a relief.

Other lifestyle recommendations include eating a Mediterranean type diet with lots of fruit, vegetables, fish, chicken, having social activities, and engaging with a hobby or work that you are passionate about. So, instead of sitting in front of your computer or TV, think about going to the YMCA, park or your favorite fitness club. I’m on my way there now.

The Alzheimer’s Association designated June 20 as the Longest Day. It is the summer solstice but its intent is to emphasize the long and difficult journey that many with the disease and their caretakers are on. The Association suggested activities to honor a person or the memory of someone who has experienced the disease. As a caretaker for both my mother and late husband, I ended three years of procrastination and made the calls to donate my brain for research on the Longest Day. Others wore their purple Alzheimer’s Association Walk T-shirts and explained their significance to others in person and on Face-book as did Barbara and Jack Markel.