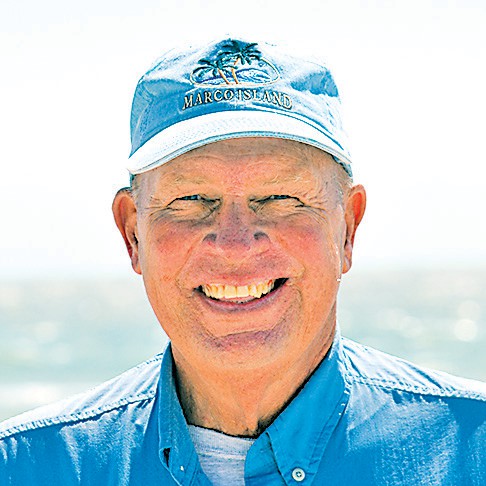 Restoring the Kissimmee River’s natural pathway has proven to be a resounding success in reviving the waterway’s ecosystem. But more work is required if the river’s terminus, Lake Okeechobee, the Caloosahatchee River and ultimately, the Everglades are to be fully revitalized.

That message was a key element of a presentation on the Kissimmee River Basin presented by Master Naturalist Bob McConville at Rose History Museum for the Marco Island Historical Society.

Lake Okeechobee’s largest watershed starts about 100 miles to the north at Lake Kissimmee, which flows into the Kissimmee River. The 3,000-squaremile Kissimmee Basin supplies 50 percent of Lake O’s annual water flow and it’s also the headwaters for the Lake O – Everglades ecosystem.

The Kissimmee River’s naturally serpentine route became a point of contention in 1947 when central and south Florida were lashed by two major storms. The Fort Lauderdale Hurricane hit in September, only to be followed one month later by a second hurricane (the National Weather Service began naming hurricanes in 1950). Both caused major flooding and inundated the pasture lands lining the riverside, an area known as the Kissimmee Prairie.

“We had a lot of pasture lands in that basin,” said McConville. “There were a lot of cattle ranchers there in 1947. They got up in arms and they were saying, ‘My cattle are standing in eight inches of water.’”

As a result, in 1954, Congress authorized the U.S. Army Corps of Engineers to dredge and straighten the river to remedy flooding problems. From 1962 to 1971, the Corps created what was essentially a 56- mile long, 300-foot-wide, 30-foot-deep canal out of what had been a meandering river.

“They figured by putting that channel in and putting that dirt up on the banks of the river, it gave them more grazing land and at the same time, prevented the flooding of the pasture land,” said McConville.

He said the change had unintended consequences that hurt the ecosystem.

The river’s channelization and additional depth led to faster water flows that erased shallows that provided wildlife habitat. The result was reduced fish catches and a reduction of the populations of wood storks and eagles by 66 percent and 70 percent, respectively.

And there were other problems.

Channelization caused Lake O’s water levels to rise very quickly and the problem wasn’t solved by the installation of four dikes. In addition, there were concerns that the more powerful water flow could damage the Herbert Hoover Dike that borders Lake Okeechobee.

In 1992, ranchers, the state and federal governments and the Southwest Florida Water Management District collaborated to make the restoration of the Kissimmee River’s natural path possible, said McConville.

“The restoration came about because they realized they made a mistake,” he added. “They took 56 miles of river and turned it into a raging river.”

He said replicating the Kissimmee’s natural path has restored 40 square miles of flood, including 20,000 acres of wetlands and 44 miles of historic river channels and bird and wildlife numbers have rebounded more quickly than anticipated.

“The success of this restoration has been used all over the world to justify the value of ecosystem restoration,” he added.

What’s needed now is a storage area north of Lake O to store excess water during peak periods, said McConville. This would also reduce polluting nutrients from fouling the lake, its estuaries and the Everglades. The stored water could then be used during moderate dry periods, he added.

A storage area would also lessen the necessity for periodic release of the nutrient rich waters from Lake O into the Caloosahatchee as a means of controlling the lake’s water level.

McConville said many people in Southwest Florida are familiar with efforts to restore the Everglades in this area.

“But not a whole lot of people that there is a part of the Everglades north of Lake Okeechobee,” he added. “To really cure things, you have to go back to the source and that’s the Kissimmee River and the Kissimmee River Basin. If we can solve what’s happening there, then it’s going to make it easier to solve things down here with Lake Okeechobee.”