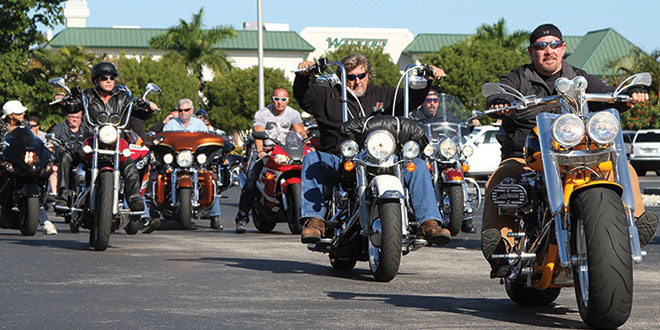 Toss out the old stereotype of motorcycle riders and their clubs. Reality is nothing like the Sons of Anarchy or even the real life Outlaws. In fact, here they are a group of soft hearted people who just happen to love to ride with the wind in their face and the freedom to hit the road.

Almost a hundred bikers hit the road for fun and charity recently. The Joy of Giving is a local 501c3 which provides Christmas for more than 1000 children in need in Collier County. All proceeds from the bike run, 100%, are donated to the Joy of Giving to support their efforts.

The Ride was a poker run format which began at 8:30 AM at Porky’s. A full complimentary breakfast buffet was provided and enjoyed by all. Each registrant drew a playing card from the 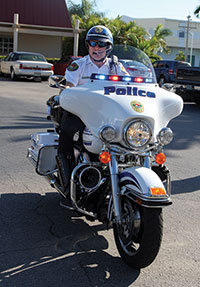 Father Tim Navin from San Marco Catholic Church blessed the motorcycles before they lined up to depart. Nicki Davis, the founder of the Joy of Giving, and her husband ride along as far as the Jolley Bridge. Nicki always says a little prayer for her father as she points up to the sky as a remembrance to her late father.

The group then proceeded to Junkanoos in Fort Myers, Sneak Pete’s in Bonita Springs, and Gators in Naples, drawing another poker card at each stop. When they returned to Porky’s, with one more card upon their arrival, the best and worst poker hands were chosen, both of which received a door prize. A silent auction which included plenty of goodies from various restaurants and merchants added to the proceeds of the day.