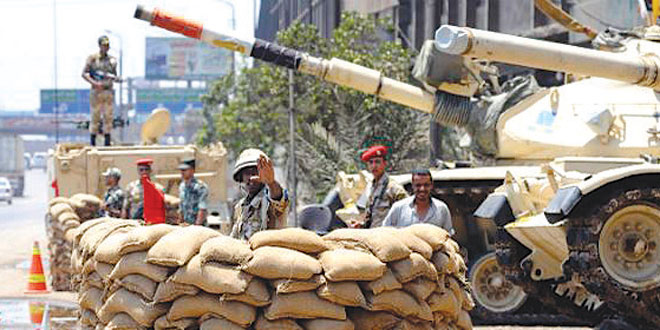 After reading as many news articles as possible and watching most news channels for updates about the events in Egypt, I asked myself if anyone was surprised about the most recent events in Egypt. Readers may recall my article about Egypt during the Arab Spring; I was cautiously optimistic about democracy’s arrival in Egypt yet more than a little pessimistic about the identity of the revolutionaries. Having seen members of the Muslim Brotherhood amongst the demonstrators waving their Korans in the air was enough to give me that “fly in the soup” feeling.

I always had great reservations about the Muslim Brotherhood takeover of the Egyptian government. When free elections were finally held and the Brotherhood’s favorite Mohammed Morsi was elected President of Egypt, my worst fears were realized. The “democratically elected” President Mr. Morsi wasted no time in changing the constitution to one that favors Sharia Law; staffing every governmental office with members of the Brotherhood and replacing some high ranking officers of the Egyptian military with followers of the Brotherhood, I knew he was trying to turn Egypt into an Islamic Republic as fast as he possibly could. Seemingly backed by a confused and ideologically challenged US State Department, Mr. Morsi acted in haste, assuming he might have had more support than he actually had. He tried to accomplish what Prime Minister of Turkey Mr. Tayyip Erdogan, an Islamist 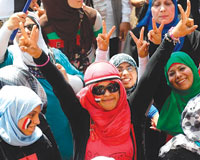 himself accomplished in ten years; steering his country away from the West towards a Republic favoring Islamic law turning back years of secular rule by constitutional governments.

Mr. Morsi may have done himself a favor had he taken the time to study recent Turkish history and taken a few pointers from Mr. Tayyip Erdogan. Having been popularly and democratically elected in 2003, Mr. Erdogan has won two more elections since, always receiving ever increasing plurality of the popular vote. In total contrast to Mr. Morsi in Egypt, Mr. Erdogan did not act in haste to change things overnight. He took his time replacing a stagnant economy with a vibrant and growing one, making sure the middle class thrived while the working class started to see the light at the end of a long, dark corridor they had been traveling through for the past eighty or so years.

He achieved all this while at the same time slowly but surely destroying the power structure of the most revered Turkish Military which intervened numerous times between 1960 and 2000 to overthrow both extreme left and extreme right elected governments in Turkey to restore democracy and order. He eliminated the threat of a possible or pending military coup by jailing top commanders of the military under false and unproven allegations.

Using his charisma and ability to give fiery speeches which may be a product of his Imam School education, 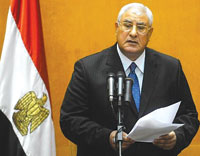 Mr. Erdogan has been able to hang on to power in Turkey. Most recently by using overwhelming police power against the demonstrators during the Gezi Park demonstrations in Istanbul and elsewhere in Turkey, Mr. Erdogan may have temporarily or permanently gained the upper hand in the struggle to hold his course.

On the other hand, the Egyptian military pretty much stayed out of the Tahrir Square during the Arab Spring demonstrations, seemingly not taking sides and after Mr. Mubarak, the longtime strong-armed President of Egypt was removed, had retained most if not all of their power. The Egyptian Generals therefore positioned themselves as the saviors of the country when Mr. Morsi’s Muslim Brotherhood government faltered and anti-Morsi demonstrations filled Tahrir Square as well as the streets of all major cities in Egypt showing dissatisfaction with a government unable to deal with day to day realities of a sinking economy, joblessness and fast increasing poverty.

While removing a democratically elected government from office by military force is not universally liked or accepted in the West regardless of the situation or reason; it may not be viewed in the same light in the Middle East. People in general trust their military, seeing them above and beyond the political fray and as defenders of the constitution and country against all enemies and evil from within as well as from abroad. In the case of Egypt, the same crowds 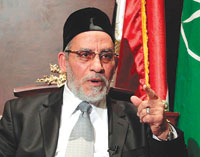 Egyptian leader of the Muslim Brotherhood.

What changed in Egypt in only a year? Most importantly, Mr. Morsi was not ready to govern a country as large as Egypt based on his Islamic ideology only! Egyptian economy sunk to an all time low under the Morsi rule; tourism declined rapidly; from the camel herders and tourist guides who work around the pyramids to major businessmen in Alexandria and Cairo; people lost their jobs and wealth, and started to suffer in real time.

This is in contrast to the situation in Turkey where the economy flourished under the pro-Islamist rule of Mr. Erdogan who made sure the businesses performed and employment remained comparatively low. While the dissatisfaction with the ruling party in Turkey is based mostly on ideological grounds, the dissatisfaction with the ruling Muslim Brotherhood in Egypt seemed to be on strictly economical grounds. One out of every two voters in Egypt initially supported the MB candidates for election based on their dissatisfaction with the dictatorial rule of Hosni Mubarak and the momentary yet colossal fervor of the Arab Spring. The Muslim Brotherhood in Egypt which had been oppressed for almost 80 years by different Presidents and governments saw the Arab Spring as their most important opportunity 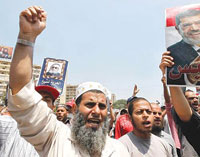 to take over the country. They carefully hid their identities during the heady days of the Tahrir Square demonstrations and came into power after the first elections following the ouster of the Mubarak government.

At the time of the writing of this article, the military in Egypt seems to be in control. However, this can change at any moment as the Brotherhood slowly gets over the shock of losing power and hits the streets. There could be some bloody events in store for Egypt in the coming days and weeks. It was interesting (but not surprising to the author) to note that Turkish Government as well as some in the US political scene have already condemned the coup and threw their support behind Mr. Morsi and the Muslim Brotherhood while most Arab countries in the Middle East applauded the actions of the Egyptian military…

What is in store in the days to come in Egypt?

For the immediate future of Egypt, the Army issued the following post-Morsi roadmap:

• Constitution to be suspended temporarily and interim president sworn in

• “Strong and competent” civilian technocratic government to be installed

• A “Charter of Honor” to be drawn up and followed by the media.

• Measures taken to empower young people and to establish a national reconciliation committee.

Obviously, this all sounds very good and 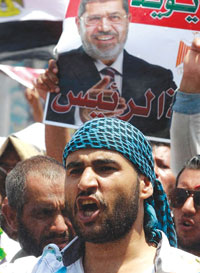 hopeful. However, those who have been through this experience in 1960, 1971, 1980, 1993 and 1997 in Turkey know that all the best intentions and roadmaps of a Military coup can go wrong once the Generals in charge face realities of life outside their bases, are faced with uncertainties of a national economy and face difficulties of day to day running of the country.

For the immediate future of Egypt all we know now is that Mr. Adly Mansour was sworn in as President on Thursday after deposed president Mohamed Morsi, Egypt’s first democratically elected leader, was ousted and placed under arrest by the military.

Mansour assumed the job under a transitional plan that appointed the head of the country’s High Constitutional Court as interim president. He became head of the court June 30 after the former chief judge retired. The judge will serve in the post of president until elections are held, a date undetermined so far.

The announcement that Mohamed El Baradei was to become Prime Minister of Egypt’s caretaker government came after the country’s new President arrived with his aides at the Heliopolis Palace in Cairo. Within a few hours, this news was denied adding to the fears that massive confusion may be the order of the day in Egypt.

I would like to see the events take their full course in Egypt without outside intervention. Let the Egyptians decide what is best for them and their country. But then, I may be too idealistic.