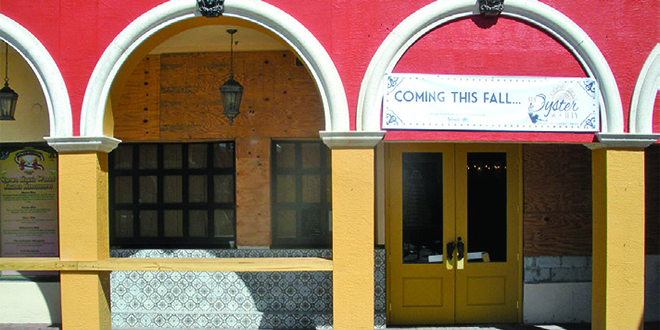 This space in the Marco Walk Plaza will be home to The Oyster Society, expected to open in December.

Editors Note: This article was inspired by a Coastal Breeze News reader who suggested we inform returning Snowbirds of the many changes to Marco’s restaurant scene that took place in their absences. Have a great idea for a story? Send it to editor@coastalbreezenews.com.

As the Snowbirds return they’ll find that the island’s menu of dining options has undergone some changes since the tourist season’s end in May.

An old favorite, the Marco Polo Restaurant, has shut its doors after more than 30 years of business. It’s location at 30 Marco Lake Drive is being renovated to become the new home of Moose Lodge 1990. Also gone is Konrad’s Tropical Grill, which featured Bavarian cuisine.

However, there is an assortment of new eateries scheduled to open over the next few months, including two popular local chains that will be making their Marco debuts.

Among the local restaurant scene’s new entries is The Oyster Society, which is slated to open in December in the Marco Walk Plaza, adjacent to Da Vinci Ristorante Italiano. The space was most recently occupied by the Marco Island Fish Company and before that, Captain Brien’s Seafood & Raw Bar – the Off the Hook Comedy Club.

As the name implies, seafood, particularly a much-loved bivalve, will be The Oyster Society specialty and the name is an homage to a bygone era when good living and style were all the rage.

“We just wanted something fun and different to represent the theme of the restaurant,” said Bianca Perez, who will be the restaurant’s general manager. “We’re going 1920’s glamour. It will be a seafood and raw bar with a great oyster menu. We were just playing around with names and came up with that one.”

The “we” she was referring to are the foursome that owns Da Vinci Ristorante: brothers Luigi and Francesco Carvelli and their cousins, Francesco and Adamo Serravalle, who are also brothers. They are also the owners of another Marco Walk Plaza restaurant, Marco Prime Steaks & Seafood.

Perez was previously general manager of a restaurant the family owned on the East Coast, in Coral Springs, called The Feisty Bull, which closed earlier this year.

The Oyster Society also serve dishes featuring such things as chicken and steak, but seafood will dominate, comprising about 85 percent of the menu, she said.

“We have a huge area for local seafood,” said Perez. “We’re definitely going to try to make sure that we’re going with local products. And every menu item will have where it’s from, where it’s grown and how they catch it.” 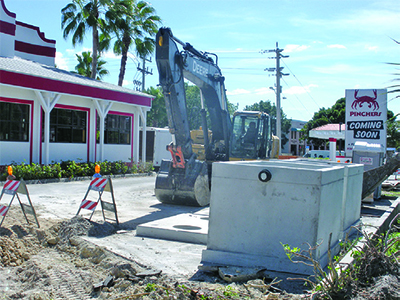 Photos by Don Manley: Interior and exterior work is underway at what will be the new Pinchers Crab Shack on Marco Island.

offerings are anything but uncommon,
she said.

“Every restaurant the Carvellis have has a family feel, so the hospitality itself will set it apart,” said Perez. “We want people to feel at home when they dine with us and we want to make sure the freshest seafood is coming to you as well.”

The multi-location restaurants that are coming to the island are Joey D’s Italian Restaurant and Pinchers Crab Shack.

An April opening is projected for the new Joey D’s, which will be located off Bald Eagle Drive in the former home of the 701 Bistro, which replaced longtime occupant Porky’s Last Stand. The building is being gutted and when work is complete, the space will feature a glass front and side that can be retracted for an open-air experience.

“It’s an expensive build-out and we’re really looking forward to coming to the island,” said Marty Kenney, who co-owns the business with “Joey D” himself, Joseph DiPascale. “Barring no interruptions, we’re hoping to be open within six months and bring a great family atmosphere to the island, just like our Naples locations.”

Joey D’s can also be found at in the Greentree Plaza at Immokalee and Airport roads, in the Publix plaza at State Route 951 and Pine Ridge Road, and there’s a stand-alone location at the intersection of Davis and Airport roads.

Kenney and DiPascale have strong ties to Marco.

They both spent part of their youths on Marco, when their families moved to the island from Michigan and New Jersey, respectively, and first met here. Their mothers still reside on Marco.

Pinchers will be located off S. Collier Boulevard in the Marco Walk Plaza, in a building that was most recently home to O’Donoghue’s Bar and Grill.

“We’re doing everything possible to be open by mid-December,” said Grant Phelan, who co-owns Pinchers, along with his father, Tony, and his mother, Kathleen. The family searched for 12 years before finding a suitable location on the island for their 19-year-old business, which features fresh, locally caught seafood and a casual dining atmosphere.

The building’s interior is being gutted and the exterior will receive a new coat of paint and new landscaping. Windows and garage doors will be installed “so we can make it a completely open air restaurant when the weather is nice,” Phelan has said.

This will be the 12th location for the Bonita Springs-based chain, which has seven locations in Collier and Lee Counties, two in the Tampa area, and one each in Key West and Lakewood Ranch.