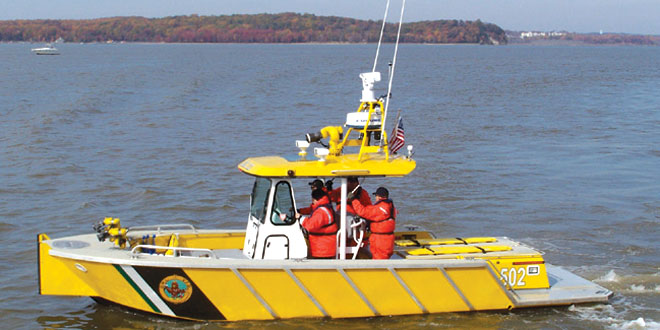 Members of the Marco Island Fire Department have been eyeing their calendars all summer, and their anticipation has nothing to do with vacation days.

The reason: The department’s new $398,000, state-of-the-art and customized fire-rescue boat will be delivery in August, marking the end of a three-year journey for Fire Chief Michael Murphy, Deputy Chief Chris Byrne and Captain Tom Bogan. The new vessel will be housed at the dock behind Station 50 on Elkcam Circle.

“We are a water-based, recreational community,” explains Chief Murphy. “We get calls of cardiac problems on the water. We get calls of diver problems, lost people and commercial fishing boats have had issues off-shore. We’ve also had fires that have involved injuries, and when you are five miles off-shore, you can’t send a fire truck.”

The need for the new vessel is no secret on the island. For more than a decade, MIFD has shared two modified recreational boats with the police department — a Donzi and a Pathfinder. These boats monitor Marco Island’s 100 miles of canals and bring aid to its 6,000 registered boaters, and with the closest Coast Guard post in Fort Myers a minimum 45-minute ride away, these boats have been put through their paces. They are busy answering between 50-100 emergency water-based calls annually.

Deputy Chief Byrne notes that when a distress call comes into the Coast Guard, it first notifies local responders. In this case, that means MIFD. “We get assistance from them as far as technical assistance, but they don’t always need to deploy,” he adds. “It is very busy with a lot of activity. Those calls typically happen in the worst weather at night or on a holiday weekend, a busy time of the year, and they can 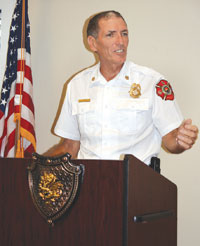 Fire Chief Murphy has worked for three years to get the new and needed water-rescue capable boat.

be very risky calls. They are very involved, lengthy calls.”

According to Chief Murphy, responses to these calls are riskier due to the recreational nature of the current two boats, although modifying recreational boats for emergency use is a common practice throughout the industry. “Part of our issue is that we are endangering our own personnel and the public in the current boats we are using,” notes the chief.

First, both boats are propeller driven, which makes getting a person out of the water and into the boat safely an issue.

Second, there is little-to-no space on the two current boats to treat injured people.

Third, the technology limitations on the current boats strengthen the environmental challenges inherent in water-based bottom search-and-rescue calls, especially in the Gulf of Mexico. A diver can go down in one location, and come up in another depending on currents and tidal activity, making it very difficult to pinpoint the victim’s position and even more difficult to perform a rescue.

The new vessel solves these problems and puts a number of new life-saving features within reach of Marco Island’s fire fighters and rescuers. Captain Bogan saw to this while working closely with Metal Craft Marine engineers for two years on the customized design and specifications for the boat. Metal Craft even provided “significant quality upgrades” in the design at no extra cost to MIFD.

• An aluminum body and diesel engine that will allow it to pull in close to a burning boat with less risk; 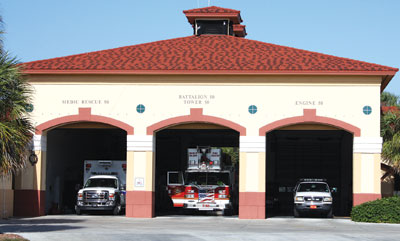 The fine and repected MIFD will now be able to answer emergency calls properly by land and by sea. PHOTOS BY NATALIE STROM

• A FLIR (forward-looking infrared) system for search and rescue calls that sense body heat in the water for up to a mile;

• A float-on medical platform that allows the vessel operator to back up right beneath a victim on a backboard for safer entry into the boat; and

“It is a multi-purpose rescue vehicle, and it is built to last 20 years,” says Chief Murphy. The city was able to fund the vessel through the use of impact fees and a six-year loan.

After the boat is delivered, though, one question remains: How will the new vessel be housed? In May, the City of Marco Island advertised that it was accepting bids for the construction of a new 20,000-pound boat lift with remotes, as well as pilings, dock and an aluminum ramp at Station 51 for the new fire-rescue boat. The city’s solicitation states that the dock and lift must be functional by August 1, 2013.

This is not going to happen. Two companies responded to the bid request, Ram Marine Services and Whitton Construction, and their bids were $60,510 and $113,724 respectively.

According to Deputy Chief Byrne, the cost estimates on the bids are higher than anticipated. “The budget subcommittee is not looking upon (the project) very favorably in the initial presentation,” he explains.

Back to the drawing board then, and MIFD and city staff are looking at some alternatives. “I think we will be able to bring a good solution to the City Council,” Deputy Chief assures. “It is very important that we move forward on the project to protect the significant investment of the new rescue boat.”