WTC – once an iconic part of the New York skyline.

SPEAKING OF TRAVEL by Vickie Kelber

It’s been 10 years since the phrase “9/11” became a significant part of our lexicon. All of us remember where we were on Sept. 11, 2001 and have stories about that day. Our story involves travel…………

We were in Portugal on September 11, scheduled to return home early on the 12th. We had spent 2 wonderful weeks in an apartment in the charming UNESCO World Heritage town of Sintra. Due to an early flight on the 12th, we booked a room in Lisbon for the night before. We checked in early as we wanted to spend time at the Oceanarium, Lisbon’s waterfront aquarium. After our visit there, my husband went back to the hotel while I continued to explore the city. When I returned to the hotel room, he greeted me with “We are not getting home tomorrow; the United States is under attack”. We watched CNN International speechless and in shock as we saw the Twin Towers destroyed by planes. It was indeed a surreal experience.

Although we were offered our apartment back in Sintra until we could fly home, we opted to stay in Lisbon; we wanted to be close to the airport and the British Airways office in the city. I went there each morning to see if there was a flight out; we were finally booked on a flight to London on the 17th, on to Miami on the 18th.

For three days subsequent to the attacks, we were unable to contact the United States. We needed to let our relatives know that we were OK and also wanted to check on a close friend whose son -in- law worked at the World Trade Center (fortuitously, his wife who is almost never sick didn’t feel well on the eleventh, and he stayed home to take her to the doctor). The phone lines were busy and internet contact was also not possible. A few times each day, I went to the Mailboxes Etc. store near our hotel to try to send and check email; nothing went through.

What a strange feeling to be outside of the United States during this tragedy and not know when we would be able to return home. Although we were inconvenienced for only a few days, I thought of and felt empathy for people all over the world and throughout history who, for a variety of reasons, have been unable to return to their homeland. While what we went through was nothing compared to the families of the victims on 9/11, it was frightening to be told “you can’t go home”.

The support we received from the Portuguese was very reassuring. We had many kindnesses extended to us including the journalist for an African Portuguese publication who came up to me at a metro station to express his sorrow and say, with hand to heart, “You are an American; I am an American; today we are all American”.

We spent our days in Lisbon staying close to the hotel. There was a Chinese restaurant a few doors away; we went there frequently, not really wanting to go far from our hotel sanctuary. One day we decided we had to get away from our constant vigil in front of the television and took a bus to the seaside village of Nazaré, where fish is still dried on racks in the open air along the beach.

Upon checking out of our hotel, the doorman expressed his sympathy and good wishes for the United States. Although our initial flight was aborted on takeoff, we finally did get to London only to find out that our flight to Miami the next day had been cancelled. 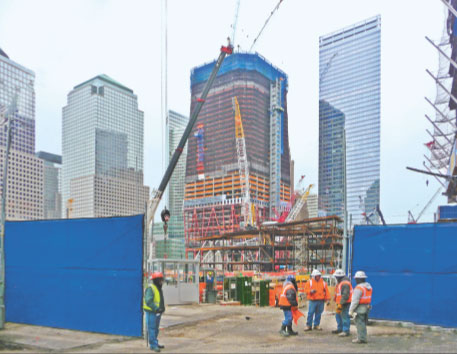 A more recent photo of the rebuilding at Ground Zero in New York City.

about Virgin Air; although they had no partnership with British Air (BA), they honored our tickets and scheduled us on a flight the next day. Initially, through BA, we were to fly in and out of Heathrow airport, so we had booked a nearby hotel. Virgin flew out of Gatwick, so we had to leave at 5AM to take a taxi to Heathrow to then take a coach (bus) to Gatwick. Our driver on the coach made an announcement expressing his thoughts and prayers for any Americans on board; the same sentiment was expressed by many whom we spoke with while waiting at the airport.

On an emergency basis, Gatwick was allowing no carry on luggage. I had purchased two large pieces of pottery and had them in a flimsy zippered carry on bag. As the bag made its way on the luggage conveyer belt, I anticipated the breakage that would occur; an insignificant event at a time of such great loss. When I unpacked at home, surprisingly, one piece emerged unscathed. The other one was broken into many pieces. As I went to throw it away, I paused and decided to try to glue the shards back together. Although unusable, it now sits on a shelf above our kitchen cabinets; I like to think of it as a symbol of fortitude and resilience.

On our flight home, the captain on our Virgin Air flight noted when we entered New York airspace and asked the passengers to join him and the crew in two minutes of silence in memory of those lost on Sept. 11.

I grew up in a home that had an American flag flying in the front yard. As a disabled World War II vet, my father displayed a flag and Marine Corps symbol on his car. It was this experience in Portugal, however, that gave me a true appreciation of the freedom for which he and many others sacrificed. It has also given me, I hope, a better awareness of and feeling for others who do not have this precious freedom.

Travel has changed in the last 10 years; ask anyone who has endured a long security line at an airport or a TSA search. This enhanced security is certainly not new in other countries; I remember traveling in Europe in the 70s with armed guards at airports and my pocket book searched when entering public buildings. There are people in many countries who live with an imminent threat of terrorism on a daily basis.

It was certainly unnerving to be stranded outside of the United States and unable to return home. I wrote some of my thoughts in my travel journal during and right after this trip, and this is how I ended the entry: As a result of this experience and threats of further terrorism, are we afraid or unwilling to travel out of the United States? Right now, our only question is where we want to go next. It is the experiences afforded by travel that help us develop understanding of and appreciation for others; I hope it also affords others the opportunity to develop understanding of and appreciation for Americans.

In the words of St. Augustine: The World is a book, and those who do not travel read only a page.