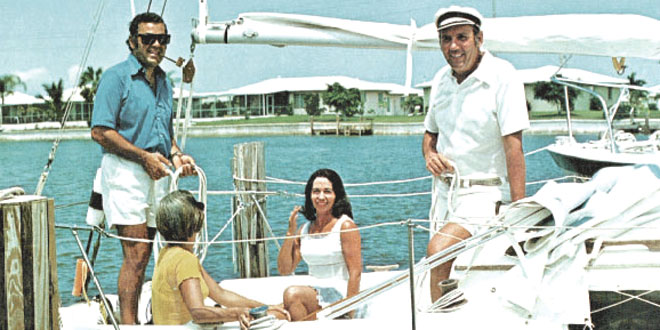 On Wednesday, November 14, at St. Mark’s Episcopal Church, a church which first opened 46 years earlier in November of 1966, many old timers came together to celebrate the life of a Modern Marco pioneer – Helen Tateo. She and her husband, Vince, moved to Marco Island in August of 1966, just a little over a year and a half after the official grand opening of the Island on January 31, 1965. They had first visited in February of 1966 and within eight months moved here permanently, bringing with them their three young sons: Paul, age 11; Jess, age 10; and Todd, age 6. In unique fashion like other pioneers before them, they arrived by water, traveling aboard a 36’ cruiser south from Norwalk, Connecticut on an almost two month voyage down the inter-coastal waterway and crossing the Florida peninsula via the Lake Okeechobee Waterway.

The Tateo family was exactly what the Mackle Brothers, the developers of Marco Island, were seeking as permanent residents: as developers their emphasis was not just in building roads, seawalls, and creating lots and constructing houses, but they were also building the fabric of a healthy, vibrant community. Extensive marketing was done to draw purchasers wanting to be a part of the Mackle vision of a unique tropical Polynesian lifestyle: an outdoor lifestyle focused on boating, fishing and sports, situated on an Island with an unparalleled pristine crescent beach. While other Florida developers of the era simply platted large tracts of land into rectangular lots, constructed roads and drainage, the Mackles were specifically chosen by the heirs of the county’s namesake, Barron Collier, to participate in an exciting joint venture on the development of Marco Island. The Colliers knew the Mackles had an exceptional performance record and that the Mackles understood the real key to building a community was the human side, the people; the first pioneers who moved to a raw, undeveloped area and created the dynamic energy and excitement that drew others in. Marco was to be a totally planned community with 71 acres set aside for schools, 55 acres committed for churches, 90 acres for parks and beach access, and thousands of acres as preserves and native habitats. Over 11 acres were set aside for libraries, a youth center and an art league and, in addition, 275 plus acres were committed for the building of a yacht club, a country club and other places for people to meet and socialize.

Not only were the Mackles visionaries, but early pioneers buying into the dream of Marco Island could also see into the future. While many purchased Marco property with the plan to retire years later or purchased lots 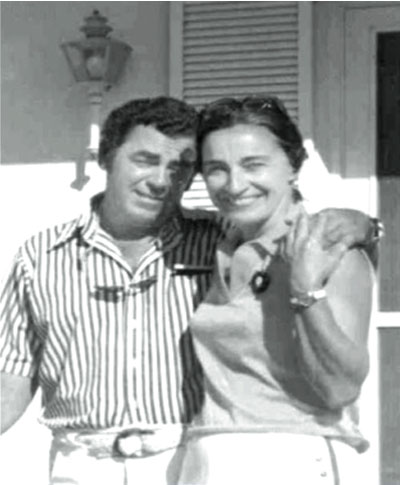 as an investment, there were those who simply took the plunge, transplanted themselves, and chose to raise young families here; actions that took a true pioneer spirit and courage. Today it is almost impossible to look around and see what this Island was like in 1966, or even to understand what was not here.

What was here? Mosquitoes – so thick that as a person walked, they could literally swing their hands back, clinch their fists and kill large handfuls. Also, hundreds of construction workers swarming over the Island, driving over daily from Miami to build roads, dig canals, survey lots, and then leave the island when the construction whistle would blow in the late afternoon.

In 1966 Marco had a permanent population of maybe 500 people, one grocery store – if we wanted to call it that – a 7-11 located where Kretch’s restaurant is now on Bald Eagle Drive, a hardware store, barber shop and a Gulf gas station next door: the Island’s sole “shopping district.” No traffic lights existed, but it did not matter as there were no roads. Your only option for travel east to west was SR 92, later named San Marco Road (from which you could drive on to the beach); while your sole choice from north to south was CR 953 (re-named Bald Eagle Dr), with the north end in Old Marco called Lee Avenue, where the post office was located, and the south end heading through “The Pines” toward Caxambas. By mid 1966 only fifteen miles of new paved roads had been constructed and 4 . miles of concrete seawalls built.

The Tateos, like all residents, drove over the old Goodland swing bridge installed in 1938, out to Royal Palm Hammock and then to U.S. 41, adding an additional 14 miles to the trip to Naples. Naples was not much more developed. Islanders picked up their groceries at the closest Publix which was located across from the current Coastland Mall. Paul Tateo remembers trips to Naples where his parents would “totally fill up both the trunk and the backseat of their car with groceries to be brought back to the Island to feed three growing boys.” His school bus ride to downtown Gulfview Middle School was equally long until May of 1969 when the Marco Bridge (now re-named the Jolley Bridge) opened and everyone happily paid a 40 cent toll to return to the Island and cut the travel time. It is hard to imagine today, but it was difficult to purchase clothes or shoes in Naples unless one shopped at the more upscale stores on 5th or 3rd Avenues. The only department store was Grants and, because there was no orthodontist in Naples, 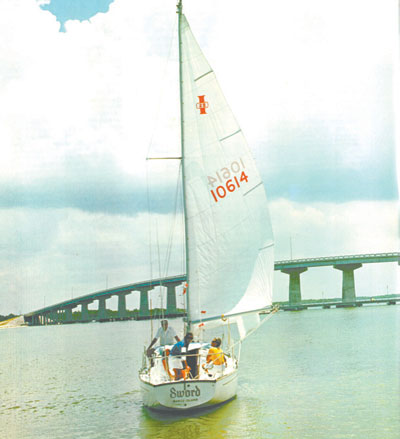 Paul’s parents drove him on the old U.S. 41 north to Ft. Myers to get braces, where they often took the opportunity to buy items at the Edison Mall – the closest mall to Marco.

For early Islanders there were few restaurants and most social activities were at the new Yacht Club or County Club or entertaining at newly built homes with lanais overlooking canals and bays. The Tateos constructed a “Mackle Built” Polynesian style home and in 1968 moved in. The Tateos, like many who followed them, were into boating, keeping their boats at the new Yacht Club. The “Sea Witch”, the 35’ Chris Craft, a wooden cruiser they arrived in, required lots of varnish and kept the boys active. When Vince Tateo sold it, he then purchased a Tahiti 33’ Ketch sailboat named the “Ichiban,” also wood. After the maintenance on wooden boats got too much, “The Sword,” a 28’ fiberglass Irwin Sloop, replaced it. By 1976 it was sold and “Shellback,” a trawler purchased; within a ten year period, they had four boats. Not only was the entire family into boating but so was the second monkey they kept as a pet named “Charlie Brown,” who hung out with Vince and was often taken aboard to “assist” as he worked on his boats. One day Charlie was spotted sitting at an open tool box picking up each tool, examining it and tossing it overboard, another time he got a hold of a can of WD 40 and sprayed himself all over until he was caught by Paul, bit him and then Todd says as a result Charlie, “got deported to the Everglades Wonder Gardens in Bonita Springs, to live out the remainder of his days with another tribe of monkeys in a large cage, surrounded by a pit of alligators.”

In a brand new community there were many opportunities and Vince Tateo decided to pursue his passion and started the first sailing school on the Island, as well as brokering boats. Meanwhile, his wife, Helen, followed her dream of having an art studio and gallery – both located upstairs in a two story commercial building in Old Marco (where Pier 81 condos now are built), above Lowe’s Marina and Jonnie Gantt Realty on the ground floor. The Tateos’ interest in boating resulted in numerous trips with family and friends north to Sanibel/Captiva, Useppa Island, Boca Grande, and south to Everglades City, the Keys, and to the Bahamas. Annually, Vince would race The Sword in the Summerset Regatta from Ft. Myers to Marco Island and back. In 1968 he was instrumental in the founding of the Sailing Association of Marco Island (SAMI) and was named its first Commodore. He 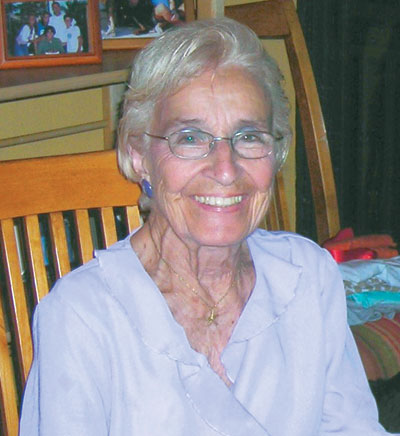 also was involved in the formation of Marco’s Coast Guard Auxiliary Flotilla 95, and was a Commodore. Boating classes were then held in the old Deltona Administration building where Marco’s main fire station is now located. Meanwhile, Helen’s art studio gallery evolved into the foundation for the Marco Art League.

For the Tateos, Marco was not a sleepy little island, and while TV reception via antenna was almost non-existent for the first three years, the boys were involved in more than just boat maintenance. Paul and Jess got jobs delivering the Marco Eagle, a new eight page newspaper costing 10 cents, written and published by Bill Tamplin, with its first issue dated March 31, 1968. Paul would later get a job scraping barnacles off boats at Marco River Marina and an after school job at Island Drug, while Jess went on to bus tables at the Old Marco Inn and Todd got a job as a beach boy at the Marco Beach Hotel & Villas. Their parents saw other opportunities and changed careers, obtaining their real estate licenses and after being employed by another company, decided to open their own in 1980 – Horizons-by-the-Sea Realty. By then Paul had gotten out of college and joined them; sadly, nine months after opening the business, Vince Tateo passed away at age 56. For the next thirty two years until her death earlier this month, Helen continued to enthusiastically sell Marco Island by communicating to others the vision and the dream that she and her family had achieved here and, as a result, she assisted hundreds of people make Marco their home. The Tateos’ three sons stayed on Marco and each continued to help build the Island like their parents had done, by pursuing their own careers: Paul as broker of Horizons Realty, Jess as a painting contractor, and Todd as a licensed appraiser. Helen would stay active as a member of the Episcopal Church and involved in the lives of her seven grandchildren, all raised on the Island and attended our local schools.

We often take for granted the relaxed outdoor lifestyle of Marco Island, the many clubs and organizations that are available, and the numerous activities we have, but none of it was by chance. Instead, it was the result of a fifty year old vision for this Island being fulfilled and the efforts of pioneers, like Vince and Helen Tateo who saw what Marco could become, pursued their dreams, raised their families and made Marco Island what it is today.

In 1969 at age 13, shortly after Vince Tateo had taught my family how to sail, I went with the Tateos and their boating friends on an overnight sailing trip to Everglades City –it’s all about the memories!