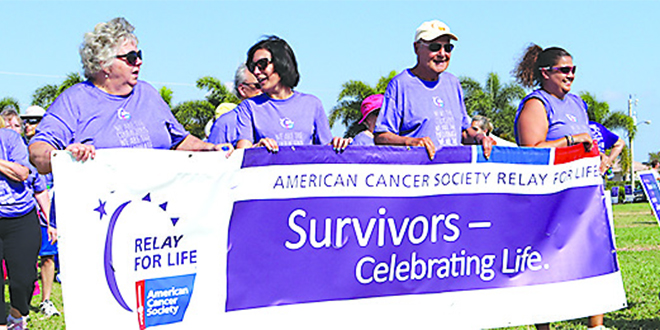 Photos by Steve Stefanides | The Relay commenced with the survivors’ lap around the track.

For the last 30 years the American Cancer Society has brought cancer survivors, families and friends together to walk hand in hand to fight for awareness regarding the ravages of cancer and the toll it takes on families and those fighting the disease.

This year will see over 5,200 communities, spread over 20 countries come together to support Relay for Life events around the world as the organization continues its battle against the disease.

The Relay for Life event itself is a combination fundraiser and an effort to raise awareness within the communities where it is sponsored. Such was the case on April 1st when the Marco Island community came together to help accomplish those two goals, as many organizations came together to raise much needed funds for continuing research and education.

The Relay for Life event is held all around the nation and is one of the most moving and genuinely emotional events you can attend. Today one in three women and one in two men will be diagnosed with cancer, so early awareness of symptoms is very vital in the effort to 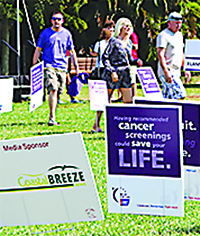 Early diagnosis of cancer is one of the best weapons in helping to defeat the disease until we can learn more about its origins and find a way to prevent it. Education is one of the best tools the healthcare community can launch against this disease. Making individuals more aware of the symptoms and early signs of the disease can go a long way to creating a positive outcome in the fight against cancer.

This event is a grassroots effort to continue to make a difference in those efforts. It allows all aspects of a community to come together to do what we can to make residents aware of the need to stay engaged.

Julie Broxson, a survivor of a recent battle with cancer received the Sandy Holdgate Award, which was presented to her by an emotional Samantha Malloy, a co-worker of Broxson at the City of Marco Island. That award recognized Broxson’s commitment to a positive and uplifting attitude during her recent battle with the disease.

A second Caregiver Award was presented to Joan Hackbarth in honor of her mother, Janet Whitebook, who recently was lost to cancer. Whitebook had been extremely involved 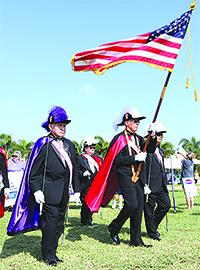 The Knights of Columbus Color Guard

with support groups around the island and mentored many caregivers. She had been a caregiver to her own sister who battled the disease and then she herself was diagnosed last year and unfortunately lost her battle. Joan Hackbarth flew in special to honor her mother. That award was presented to Hackbarth by Donna Cottrell, who is also a cancer survivor.

The Marco Island event saw all age groups and organizations come out on that Saturday to join in that effort. From the Marco Island Academy that invigorated the attendees with their high energy levels, to the JW Marriott who cooked burgers for the attendees, to DJ Steve Reynolds who kept attendees informed and the music flowing.

After opening remarks, purple shirted survivors took to the field to follow a color guard made up by the Knights of Columbus to begin the ceremonial walk around the field. Walkers would continue to walk for the cure until about 9 PM when the luminaria bags would be lit to honor those that had passed from cancer as family and friends would take a moment of silence. 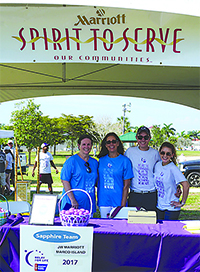 The American Cancer Society’s chapter here on Marco raised their goal of $275,000 through the work of the 27 teams that participated in this year’s event.

For 15 years the JW Marriott Marco Island Beach Resort has actively participated in Relay for Life, ranking #3 in Florida and #30 in the U.S. for fundraising. In addition to Relay for Life, the resort has supported local beach clean ups and recycling efforts, the Collier County Adopt-A-Road Program, Tommie Barfield Elementary School, Marco Island Charter Middle School, Marco Island Academy, Harry Chapin Mobile Pantry, Habitat for Humanity, and more. The JW Marriott Marco Island Beach Resort’s Spirit to Serve program donated a total of $238,499 in 2016. For its extraordinary volunteering and fundraising efforts, the resort has been selected as a Hall of Honor recipient of the Alice S. Marriott award for Community Service.