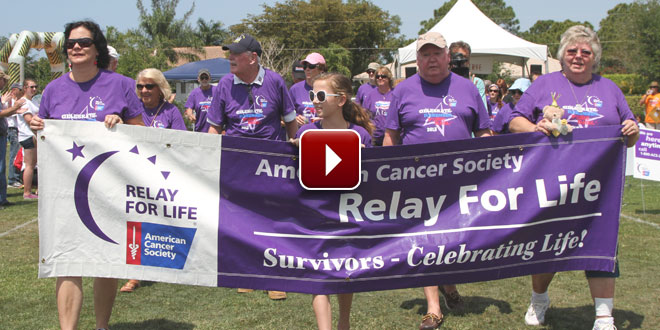 Marco Island joined thousands of communities all around the country on April 13th in launching Relay For Life, one of the most successful and recognized events in American Cancer Society’s history. Ken Hobson, MC for the two-day Relay, welcomed survivors, volunteers and supporters to the opening ceremonies which began with Marva Sutt singing The Star Spangled Banner.

Raul Medina of Suntrust Bank and Chair of Relay-Marco Island, described the phenomenal growth of Relay since its inception in 1985. More than four billion dollars has been raised worldwide, “to support the American Cancer Society’s mission to Save More Lives.”

Last year, Marco Island Relay raised more than $216,000 to place sixth in Florida. Raul’s goal for this year is to raise more than $250,000 and place within the top five communities in Florida.

Joe Batte, Council Chair, presented a City Proclamation to Raul declaring April 13-14, 2013 official Relay For Life Days. Raul acknowledged the support of the city, Relay committee members who came from many of the island’s businesses and 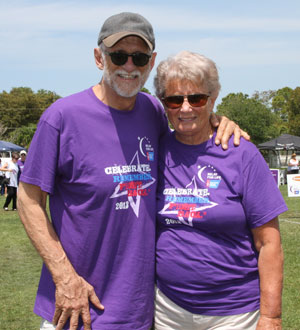 Raul introduced Lisa Meurgue, a cancer survivor, who presented the “Spirit To Serve” award to Judy Mayo of the Marco Island Marriott Beach Resort. Judy, a breast cancer survivor, embodies the passion and commitment to the cause of finding a cure for cancer. She has worked tirelessly for five years in support of Relay, since her own diagnosis, that of her late husband, Coach Joseph Mayo and her brother, Jake Shea. She inspires her family and friends, her colleagues at the Marriott and wherever she goes, she is a proud supporter of Relay For Life.

Jake, visiting from Connecticut, walked the Relay’s Survivor Lap with his sister along with a large group of other survivors. Judy’s daughters, son-in-law 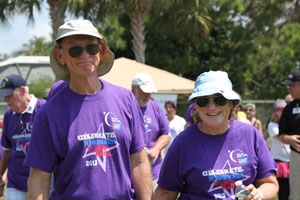 and beloved grandson, Joey Williams, proudly walked the Relay with them during the Caretakers Lap.

The event continued throughout the day and into the night. Many camped overnight to keep the laps going from the opening on Saturday to the close at 6 AM Sunday morning. During the event, teams held raffles, bake sales and played games to keep up their spirits and energy.  An inflatable playground for kids included a Wrecking Ball, a spaceship and more. Raul’s team of organizers held several activities throughout the Relay, such as a Scavenger Hunt, Spelling Bee and Lip Sync Contest. There was also a birthday lap, backwards lap and fairy tale lap, among many others.

If Relay activities were fun, the Luminaria lap was one of the most touching.   Each luminaria was lit in honor of someone who has fought cancer. The word “HOPE” spelled out in the middle of the track was an inspirational message to keep up the fight. A beautiful nighttime tribute honoring family members who fought cancer in the past and for the men, women and children who are still doing battle.