Relay for Life Kick Off 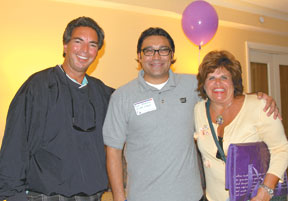 By Jane A. Marlowe
janem@coastalbreezenews.com

The American Cancer Society Marco Island Unit kicked off Relay For Life at a reception hosted by the Marco Island Marriott Beach Resort on Wednesday, November 7. The event was held in one of the Marriott’s Lanai Suites offering a lovely view of the Gulf waters and lush tropical foliage along a private walk a few steps from the beach. A cocktail reception buffet was provided courtesy of Porky’s Last Stand, Publix Foods and the Marriott.

Raul Medina, Chair of Relay For Life Marco Island, welcomed guests and committee members inviting them to view a brief video of the beginning of Relay started by one man in 1985. Dr. Gordon Klatt, a colorectal surgeon in Tacoma, Washington, wanted 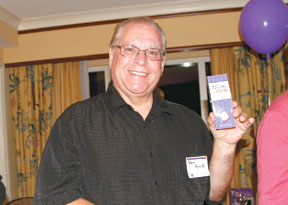 to honor his patients for their courage in facing their cancer diagnoses. He walked the track at Baker Stadium, University of Puget Sound, Tacoma, Washington over a 24 hour period raising money for a cure. In 1986 the first formal Relay was organized with hundreds walking for a cure. Today four million walk Relay worldwide.

Mike Tighe of the Marriott, described the hotel’s commitment to Relay through its Spirit To Serve program. The Marco Marriott ranked #14 among participating Marriott hotels in 2012 and the associates seek to raise that score in 2013. Mike introduced Judy Mayo, Co-Chair with Cathy Nelson, of Survivors/Caregivers. Both are associates of the Marco Island Marriott and participants in Spirit To Serve. 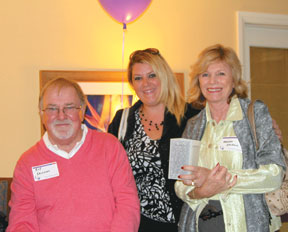 and the importance of family support through surgery and recovery. She walked Relay with her family less than two months after surgery. Judy walked the walk again with her husband and daughters the following year before he lost his battle against lung cancer. She encouraged everyone present to continue the fight, emphasizing how much support her family has received from this abiding, life affirming program. 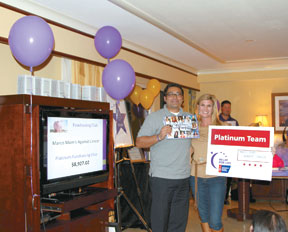 Bonnie Geddis, creator of Marco Moms Against Cancer calendar, was recognized for raising over $8,917 so far.

Bill Dean with inspiring his team to plan a number of successful events to exceed the Club’s own goals for Relay.

Nancy Brewer, Luminaria Chair, led the group in a brief candle lighting ceremony remembering family and friends who have lost their battles with cancer. A very special Luminaria ceremony with many hundreds of luminaries will be part of Relay in April, 2013, as it has been for several years.

Gloria and George Kas of Naples attended the Relay Kick Off. They maintain a northern residence in Chicago, Illinois. Gloria is a nine year survivor of breast cancer. Her mother was diagnosed after Gloria and her father succumbed to lung and brain cancer 12 days after his diagnosis. As an RN, Gloria recognized the seriousness

Michael Tighe reiterates the Marco Island Marriott’s commitment to the cause.

of her cancer early on and is grateful for successful treatment and recovery.

She commented. “We found this evening’s event very moving. It’s touching to hear people sharing, all to get to the same goal. I hope my kids never have to go through what I had to experience. I am so blessed to have my family.”