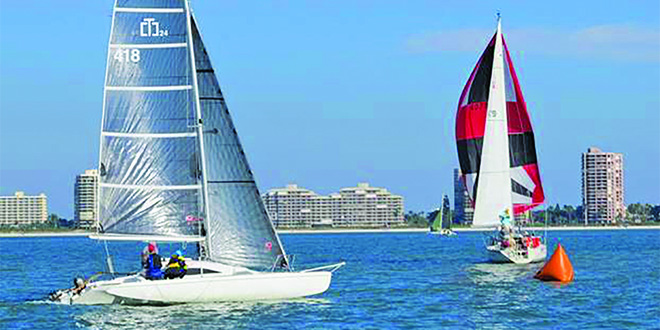 The Marco Island Yacht Club’s Annual Fall Sailing Regatta was recently held off of the Marco beach on a sunny Saturday, with winds perfect for sailing.

Ten large sailboats (30-50 feet) competed around a three-mile triangular course set off of the Marriott Marco Island Resort. Mark boats identified the course by placing yellow blow-up buoys. The first turn was located a few hundred yards off the beach, giving spectators a great view of the boats turning 120 degrees and raising their spinnakers and/or re-setting their sails

Race officials established two classes of racers. Spinnaker boats started in the first heat, followed by the larger, non-spinnaker boats in the second. As racing started the boats headed off in very light winds. They looked to be doing more of a slow-motion glide than a fast racing tack. Regardless, it was a beautiful sight; watching the sails skim slowly across the relatively flat sea. Because of the low wind velocity the first race took well over an hour. By mid-day the wind died completely. At that time, race officials smartly declared a lunch break. Good planning! Within half an hour the wind picked-up and shifted to the southwest. Wind speed increased to almost ten knots. Great sailing weather!

Principal race officer, Dave Dumas of Marco Island, had the mark boats adjust for the wind change by setting new courses; this time with the start line just off of the beach. Spectators on the Marriott beach now had a front-row seat for watching the start of subsequent races. Because of the increased 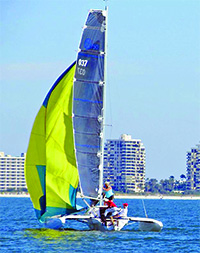 winds, race officials were able to add a third race for the spinnaker boats.

The Marco beach was full of beachgoers and spectators, all taking in the beauty of the sand and water with the sailboats gliding across the Gulf. A beach wedding at the Marriott actually moved their photo session closer to the water so their wedding photographs could capture the view of sailboats in the background.

The racing boats were handicapped (similar to golf) based on their size, hull characteristics, etc. This was then factored into the race results as an adjustment to the actual time/distance measure. The handicap system was developed to give all boats, regardless of size, etc., an equal chance in a multi-boat regatta. This was explained by Marco Island Yacht Club Sailing Fleet Captain, Chuck Downton and his wife, Meredith, who were located at regatta headquarters on the Marriott beach.

Proceeds from the Regatta benefit the Youth Sailing Program, sponsored by the City of Marco Island, located at the Community Sailing Center next to the Yacht Club. The Yacht Club’s next regatta will be Saturday, February 11 in the same location. Contact Chuck Downton at 239-394-4323 for more information.