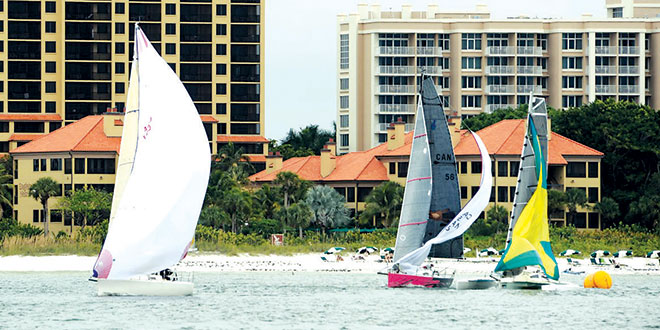 Following a brief at-sea memorial honoring friends and loved ones who had passed-away during the past year, plus victims of the Paris attacks, ten of Southwest Florida’s fastest sailboats circled around a line between a 42-foot power boat and an inflatable orange buoy in the Gulf of Mexico, about a mile off of the Marriott beach. This was the start of the recent Marco Island Yacht Club’s Annual Fall Regatta.

Wind conditions were 15-20 knots from the northeast. Because of the strong winds, only the larger boats (30-50 feet) raced. Sailors on those boats loved it! Two classes of boats, spinnaker and true cruising, were established by U.S. sailing certified principal race officer, Dave Dumas of Marco Island. He then started the spinnaker boats as scheduled, promptly at 10:30 AM.

That group sailed for the first (windward) mark, which sat roughly 50 yards off the Marriott beach. Tacking back and forth as they headed as close as they could into the wind, they rounded the mark and then headed for Mark 2, roughly forty-five degrees and one mile to the northwest.

By this time the non-spinnaker boats had been started. They faced the same challenge – to round the windward mark on their port side and head off to the second mark. The triangular racecourse, marked by the inflatable yellow marks, had a finish line the same as the start line. Boats were handicapped based on size, length of waterline, sail area and other factors so that different make/model boats were competing fairly with each other.

All this was explained by

Taken on the deck of Dragon Fly, first placewinner in the true cruising class.

Marco Island Yacht Club Sailing Fleet Captain Chuck Downton, at the regatta headquarters on the Marriott beach. Onlookers could get inside information not only on the race, but on some of the boats and sailors competing. “Color commentary,” Chuck called it.