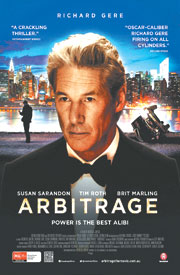 Richard Gere moves through “Arbitrage” like a sleek panther. Everything about him oozes wealth: not the Trump type of display, but the understated Gramercy Park Mansion type of polished dark wood and quiet elegance. Gere plays Robert Miller. As Miller, Gere is no longer the much younger playboy type of millionaire he played in “Pretty Woman”. He’s much older; his hair is wavy white; his face is more chiseled; his demeanor is suave, but cynical and dismissive of lesser mortals. He’s serious and so is the movie. It’s – a combination of whodunit (although we know the perpetrator) and melodrama. Thanks to a superb cast and excellent direction by Nicholas Jarecki the film is well done, one of the best of the year.

Miller celebrates his 60th birthday with his family; wife Ellen (Susan Sarandon) and daughter Brooke (Brit Marling) are the primary members. All seems right with the world. Miller is on the cover of Forbes magazine, and he’s trying to sell his hedge fund company and turn a huge profit. Unfortunately he invested unwisely in a Russian copper mine and cannot get his money out of Russia. In a down market and investors demanding their money, he has to alter his books. While all this is going on Miller is enjoying a dalliance with Julie, his French, art dealer, cocaine-snorting mistress. Things go terribly wrong in an automobile accident in which Julie is killed. Miller runs away from the scene, enlists the aid of a young black man (Nate Parker) whose father once worked for Miller, and Miller is getting ever more deeply in trouble.

As Miller tries to plug the gap in his books, his buyer (Graydon Carter) is putting the deal off; a Colombo-type detective (Tim Roth) is very suspicious that Miller was involved in the accident; and daughter Brooke discovers the discrepancy in the books.

Miller relies heavily on his lawyer-guru, Syd (Stuart Margolin) to get him out of his troubles, and Syd gives him some sage advice, including hiring the best lawyer “north of 96th Street” a subtle film reference to the Harlem area.

As the plot unfolds the film takes fascinating twists and turns as it all turns on Miller’s pivot point: “It’s all about the money”. Miller is a risk-taker, a crafty gambler who finally has to face the problem of what happens when the world around him does not respond as he commands it. Down to the very end this movie commands attention and produces some superb dialog as well as outstanding acting.

“Argo” is a terrific, engrossing movie. Ben Affleck did a wonderful job directing and acting. The cast is superb. It is “based” on a true story, and that is the only flaw of the film. Much of the story is true; much of it is Hollywood within Hollywood.

The movie begins with the 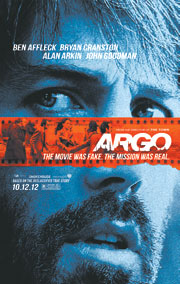 outrage of the frenzied crowds in Tehran after the Shah, suffering from cancer, has fled to the United States for treatment. The Ayatollah and the Revolutionary Guard have seized the American Embassy and taken more than 50 hostages. Six Americans manage to escape, and find refuge in the Canadian Embassy. Then the dilemma: how to get them out before they are discovered?

After a series of goofy ideas (e.g., get them bicycles to pedal to the border hundreds of miles away) are rejected, Tony Mendez, a real person played expertly by Mr. Affleck, is called upon. He’s a CIA “exfiltrator” a specialist in getting people out of tight fixes abroad. According to the movie, Mendez comes up with the idea of making a fake movie, and getting into Iran to set up the six Americans as a Canadian crew creating the movie. That way they’ll have the credentials to fake their way out of Iran. “Preposterous”, respond the rescue planners; but they are persuaded that it’s the best bad idea of a series of bad ideas.

Mendez recruits John Chambers (another real person, beautifully and humorously played by John Goodman), a Hollywood prosthetics expert, and Oscar winner. In turn they take on Lester Siegel, a superb Alan Arkin role, to be the fake producer, to crank out publicity, help find a script and set up the background story.

The script they decide upon is “Argo”, a science fiction story. (Note: In truth the script was immediately selected, and the name was based on an old “knock-knock” joke: you figure out the rest of that one!).

Mendez goes to Tehran as a Canadian, gets the Americans to rehearse their roles as a film crew, and succeeds in getting them out, after a series of nail-biting adventures.

The film is replete with excellent photography (shot in Istanbul), brilliant performances by Affleck, Goodman, Arkin, Victor Garber as Canadian Ambassador Ken Taylor, Bryan Cranston as a CIA director, and the escapees – Clea DuVall, Tate Donovan, Scoot McNairy, Rory Cochrane, Christopher and Kerry Bishe. There are great interwoven scenes of the chaos in Tehran and the zany antics of Mendez, Chambers and Siegel.

For those interested in history, a lot of the movie, especially the ending, is made up. The Canadians are properly annoyed that they did not receive their share of credit for the escape: Ambassador Taylor and John Sheardown, an embassy employee (not in the movie), arranged many or most of the details, including getting the airplane tickets for the escape. Taylor was actually “spying for the United States” according to real sources. The postscript to the story had to be rewritten to make it somewhat more accurate. Even the story of Mendez and his wife is fiction. She actually drove him to the airport when he left for Iran!

The exciting chase at the end never happened. But, it makes for outstanding, tense filmmaking. After all, it’s Hollywood inside Hollywood! It’s going to be one of the biggest hits of the year for good reason.