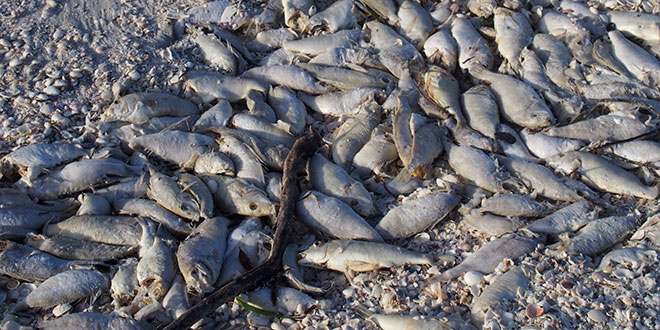 You can smell the whiff of dead fish from the boardwalk of Residents Beach. Thousands of dead fish blanket the water’s edge from South Beach to the tip of Sand Dollar Island.

Collier County raked the beach on Friday, October 7, and is scheduled to return on Monday, October 10. Die-hard walkers braved a cooler Saturday morning for their regular beach routine, however, some of them had to turn back due 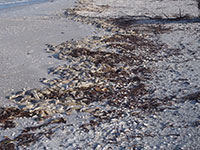 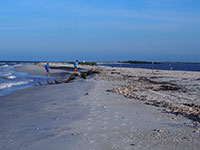 turtles and manatees from the red tide.”

Marco Island’s Beach Steward Cristina Leske started her usual morning walk from South Beach, but she did not last long. She said, “The fish were just too many, and I started having an allergic reaction.”

According to the National Oceanic and Atmospheric Administration, Florida’s harmful algae bloom (HAB), or red tide, occurs when colonies of microscopic algae 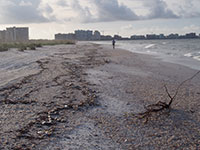 known as Karenia Brevis grow out of control, producing harmful effects on fish, shellfish, marine mammals and birds. With the right wind conditions, the toxins can cause temporary irritation to humans in the form of minor coughing, eye and throat irritation.

One walker suggested utilizing the path closer to the condos and hotels and away from the shoreline. Sensitive population like the elderly are cautioned when walking the beach during the presence of red tides.