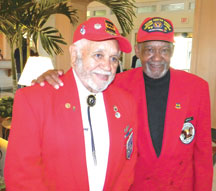 This story began in 1925. It was told by Lt. Col (Ret.) Leo Gray to a dozen fascinated Marco Islanders at a luncheon sponsored by the Hilton, and hosted by the Marco Island Center for the Arts on November 9. Col Gray’s story is about the Tuskegee Airmen, a now-famous group of pilots who flew fighter planes and some medium bombers in World War II when black pilots were virtually unknown. Not only did they fight valiantly as an all-black group, but they disproved a common view that black people were incapable of performing well as soldiers and, particularly, as airmen.

In 1925, the United States military establishment did a study of black troops in World War I. Notwithstanding the fact that black soldiers fought in every American conflict since the Revolutionary War, the military concluded that black soldiers were unreliable, inferior, unskilled and generally cowardly. Black soldiers were segregated and confined to menial jobs while black and other non-white sailors were relegated primarily to acting as mess stewards.

Just prior to World War II, the government began a civilian pilot training program. With war looming in Europe it was clear that the U.S. military was short of trained pilots as well as other skilled personnel. The initial program was limited to white men only. However, under pressure from some all-black colleges and some newspapers, including the Pittsburgh Courier, the government opened a limited program at six black colleges.

It was possible to qualify for the program without a college education and become a pilot with a high school education plus passing a written exam. Leo Gray qualified. By the time he entered the flight program at Tuskegee Institute, a number of classes had graduated, and handfuls of black pilots began their military service as officers. Col. Gray, who was raised in the Boston area, whimsically said he “did not know he was inferior” when he signed up for the program.

With support from Eleanor Roosevelt, who went to Tuskegee to support the cause of the Tuskegee Airmen and influenced the president to prod the army into utilizing the graduates in combat, the 33rd Fighter Group was sent to North Africa. The army settled on North Africa, apparently as the best place to keep them in a subordinate role. Along the way the black pilots endured the discrimination common in that period. They were even dubbed “Roosevelt’s Boys” by some bigoted white officers. Although the military issued an order in 1944, prohibiting racial discrimination on military bases it was ignored at a number of bases. President Truman integrated the armed forces in 1947.

By some quirk the all-black 99th Fighter Squadron was able to participate in the fight along the Anzio beachfront in the battle for Italy. They acquitted themselves well. When the need for fighter escorts for bombers attacking enemy positions from Italian bases the group was assigned to extensive combat operations. They painted the tails of their P-51 fighters bright red, and were known by German fliers as “Red Tailed Devils.” They flew various missions, including bomber escorts, strafing (the most dangerous) reconnaissance, cargo flight escorts – and even rescuing prisoners of war.

For one particular raid, the longest mission to Berlin from the Italian base, the group was presented the Presidential Citation. In the course of their heroic actions they suffered 80 pilots killed, 32 taken prisoner, and about 18 who were shot down, but escaped from behind enemy lines.

Today, there are 43 Red Tails left, out of 355 who went overseas. They held their first reunion this year and were presented with red feathers as mementos.

Col Gray narrated what happened to him after he left the military service. He went on to advanced degrees, and eventually became an expert in agricultural economics. He has written a number of tracts, including some studies on pollution.

HBO ran a program about the Red Tails, and George Lucas has a film scheduled to be released on January 20th about the unit.