Red 2 – Sit Back And Escape 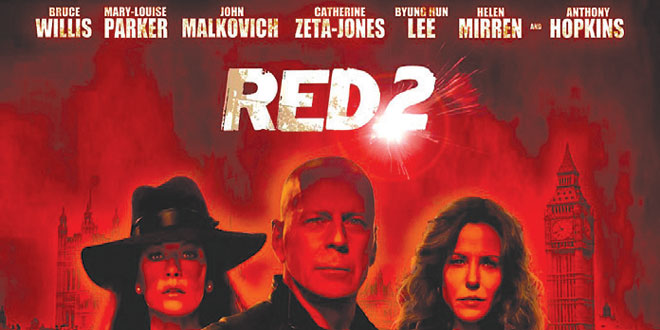 No Zombies. No Vampires. Not even an Alien. RED2 is all about good old earthly mayhem with enough one-liners and visual gags to make for excellent escapism.

The old gang of semi-retired (and retarded) not so secret assassins is back again. Bruce Willis (Frank), John Malkovich (Marvin) and Helen Mirren (Victoria) reprise their identities as “Retired and Extremely Dangerous (RED)”. This time they are after a deadly super weapon built and hidden by a dotty British scientist well played by good old Anthony Hopkins. He manages to confuse and surprise everyone. Is he really goofy, or is he playing some clever game? The gang gets him out of an institution, and the fun begins. There are all the familiar clichés with nice twists – car chases, explosions, murderous crossfires and even some martial arts – all with tongue in cheek. If you are looking for a deep, profound spy movie, don’t bother. If you are looking for some laughs you’ll find them. 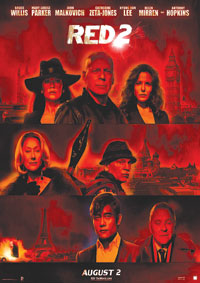 having a splendid time with all the nonsense, clowning and not-to-be-taken-seriously violence. There are enough bullet holes from automatic weapons to satisfy the NRA. In many ways the film belongs to Mary-Louise Parker as Sarah, Frank’s girl friend from the first RED. Her facial expressions alone are worth going to see; she also has some very funny lines. Any viewer should want to see a lot more of Ms. Parker on the screen. She’s a deft actor.

The movie skips from Washington to London to Paris to Moscow with some nice visual touches. But everything is subordinate to the non-believable, but continually amusing, plot. The writers have added a couple of new characters to the story line: Catherine Zeta-Jones is a delicious Russian former flame of Frank’s; Byung-Lun Lee is Han, the most famous martial arts/spy person in the world. He and Frank tangle in a riotous fight.

The characters shift allegiances without compunction and they play it straight throughout – the hardest form of comedy. This is not “Soldier, Sailor, Tinker, Spy”. It’s a spoof and a pretty good escape from the real world.