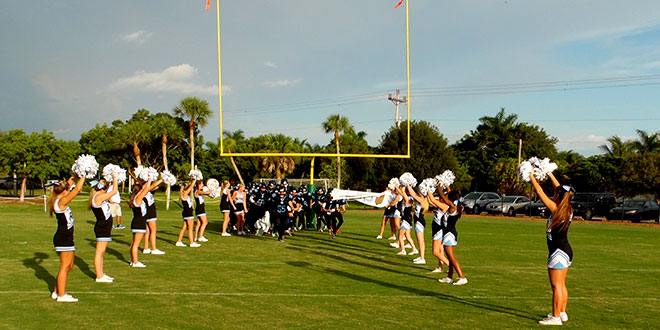 The Rays travel to Bullard, Texas to play in the Brookhill Football Classic against Edgewater, Texas at 7 PM on Friday, August 28

The statistics didn’t count in the preseason battle against Gateway Charter School, but overall Fowler was pleased.

“We probably ran for 200 yards and threw for 150,” Fowler said. “We made adjustments at half time that gave us momentum that we expect to carry forward [against Edgewater].”

Fans got a surprise when the first quarter opened with both schools fielding junior varsity teams, the first time for MIA.

With MIA having a 30-man roster, Fowler isn’t sure how often a JV team will play, but for the night it was good to get them into game-condition situations.

The varsity teams took over in the second quarter. It looked like MIA would score first.

MIA’s Tyler Gresham (8) is alone with his thoughts as he readies for the preseason game against Gateway Charter School, while Bon Deese (74) makes a point to other players.

Brian Flynn made plays on both sides of the ball. Playing safety, he pounced on a loose ball to place MIA in scoring position. As wide receiver, he turned a slant pass from Andrew Fowler into a 30-yard gain. Unfortunately, scoring expectations ended with a Gateway interception in its end zone.

Gateway’s Girard Battle powered his way 42 yards for the game’s first score in the second quarter. The extra point kick failed, leaving the game at 6-0 at half time.

The big names on offense to be heard all season are Cayden Couture, Andrew Fowler, Tyler Wallace, Tyler Gresham, Patrick Michel and Flynn.

Couture scored first for MIA on a 26-yard run. Wallace caught a three-yard pass from Fowler for its second score, and Gresham had a 69-yard jaunt that resulted in Michel’s 11-yard TD run in the fourth quarter.

Gateway Charter defenders give chase as MIA’s Tyler Gresham runs for 69 yards to set up a Rays score.

“We made mistakes, but that is what an exhibition game is for,” Fowler said. “We came out of the game healthy and ready for Friday.”

Fowler traveled to Texas when the teams were announced in May.

At the time he said, “It will be a chance to be a part of that camaraderie that you feel at the college level. This will be a good step for us by building cohesiveness as a team, to come out here and spend three days together.”

MIA will have 50 passengers on a Spirit Airlines flight that leaves out of Fort Lauderdale at 7:30 AM on August 27. They return the evening of August 29 to Fort Lauderdale.

On opening night, August 27, Brookhill will host St. Bernard’s Catholic of Eureka, CA. MIA will follow with its game against Edgewater on Friday, and on Saturday, Houston Second Baptist plays Episcopal School of Dallas.