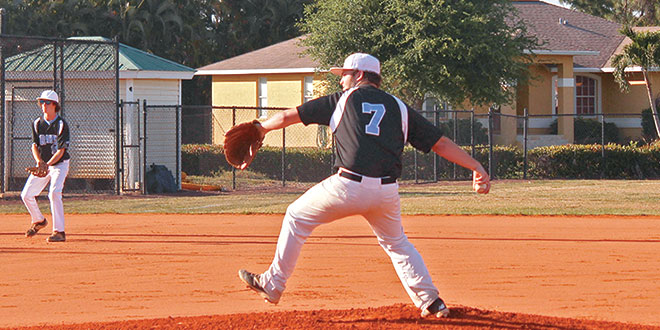 Runners were plentiful, either by hits, errors or mental mistakes.

In the very first inning Neumann scored four times. Mental and fielding mistakes put runners on base. Two hits, including a three-run home run by Celtics Cameron Criss, accounted for the runs on the way to an 18-8 win.

Each team scored in five of the innings, but the Celtics scored in bigger bunches. They pounded out 18 hits to the Rays’ 8.

Chris Liebhart, Rays coach, was looking for a win so that his team could move up in 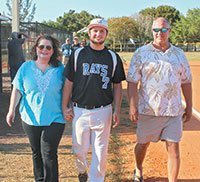 Marcus Seidman with his parents Jennifer and Steve Cunningham.

the standings to get a better seed in the district tournament. However, the Celtics win moved them ahead of the Rays in the standings.

The most unusual run of the game came without a hit. Cole Stretton took a swing at a pitch and hit the catcher’s glove, automatically giving Stretton first base. A head-first slide got Stretton to second.

He then got such a big lead off second that it unnerved the Celtics pitcher, who threw the ball into centerfield and Stretton raced home.

Stretton was one of six seniors playing their last home game. Stretton, Marcus Seidman, Andy Delgado and Cameron Ragan played all four years when the sport began at the Academy. Brian Flynn 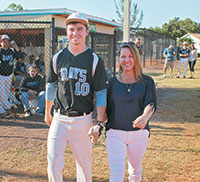 Cole Stretton with his mom, Nadine.

Seidman and Delgado were battery mates all four years, with Seidman pitching and Delgado catching.

Seidman thinks at the team as a “brotherhood that I will remember for the rest of my life. It is a good feeling to play a sport you care about and spend that time with your friends.”

Delgado did not play catcher until his freshman year, under his dad Andy Sr., who started the baseball program. “Beating First Baptist Academy for the first time was a big win this year as it was one of our goals,” the catcher said.

Stretton spoke on how the team progressed over four years. “We came together as a family 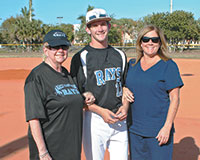 Brian Flynn with his grandmother Mary Jane O’Sullivan and his mom Maureen.

and became more competitive. I hit my first and only home run against Gateway Charter in a 12-4 win this year.”

Ragan recalls that game as his big day, knocking out three hits. “We came together as a team and all had a good day,” he said.

Flynn also hit his first and lone home run in the game. “I love playing baseball with all my friends,” he said. “Given the chance I would do it all over again.”

Wallace had not played baseball until joining the Rays three years ago. “It has been full of experiences,” he said. “I will have lots of memories.” 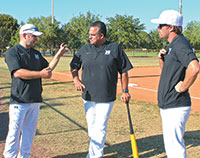 Liebhart said, “The top four teams, Canterbury, Evangelical Christian, Community School and Southwest Florida Christian Academy are just so much better. With those teams you make mistakes and they will put you away.”

“It is difficult on this island to have a good high school team when you don’t have a middle school playing baseball,” Liebhart added.

Marco Island Charter Middle School has not had a baseball team for at least five years. With coach Alex Galiana, the Charter School was a team to reckon with, winning two Southwest Florida Middle School championships.