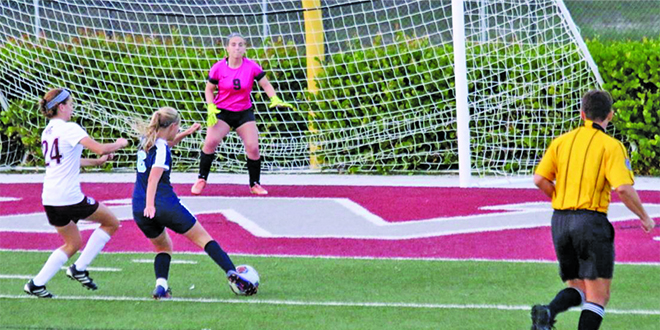 Photos by Jenny Cartwright: Teagan Havemeier gets off an early goal shot against First Baptist Academy.

The Marco Island Academy (MIA) girls soccer team came tantalizingly close to their first regular season winning record since they fielded their first team four years ago. Facing two of the division’s toughest teams in their final two games, they needed to win only one to get into the winning column for the year. Facing First Baptist Academy (FBA), with only two losses, for the second time in two weeks, the Rays hung with them on FBA’s home field, ending the half with a 1-1 tie. MIA scored first on a goal by Ellie Ball after receiving a neat pass from Danya Zarate. When the score reached 3-1 in the second half, Coach Watt moved Olivia Watt to striker (from center mid-field) and pulled defenders up to the top of the field. “With the adjustments, we were hoping for a ‘Hail Mary’,” Coach said, “It just didn’t work out and resulted in a score which didn’t reflect our play. We had two really nice shots that could have turned things around – one off the post and the other stopped on a lucky save by their goalkeeper. We had them rattled and never went away.” The team was visibly exhausted after this one. Their lack of depth on the bench hurt toward the end. Final score: FBA 5, MIA 1.

The regular season finale was played on January 10, under the Winterberry Park lights against Community School (CS), whom the Rays had previously beaten 2-1. This game was also a squeaker. It was well worth seeing. In the first half, the Rays put on an offensive clinic. MIA scored two goals in the first ten minutes and looked unstoppable. First, Teagan Havemeier served up a header to Ellie Ball in the crease from an impossible spot against the right side of the net. Five minutes later, Danya Zarate plowed through the defense and was able to pass to the streaking Ball in the middle, who put a laser into the left corner of the goal. It looked like smooth sailing until seven minutes later, when goalkeeper Kayla Kladis misjudged a looping shot from the middle, 30 yards out, right down the middle. That seemed to take some of the momentum away from the Rays.

For the last 20 minutes, MIA’s offense had to get along without Danya Zarate, one of the team’s leading scorers, who had to replace the injured Kladis in goal. Coach Watt says he learned a lot from this game and was proud of the way the girls competed against a higher skilled team. “My girls gave me everything they had, and when I asked, they gave me a little more,” Watt said, “It was a tough night but I am very proud of them all.” Final score: CS 3, Rays 2. Final record: 8-8-1.

Despite the loss, the Rays, for the first time ever, were awarded a home field district quarterfinal playoff game, January 17 at Winterberry Park, against Community School.