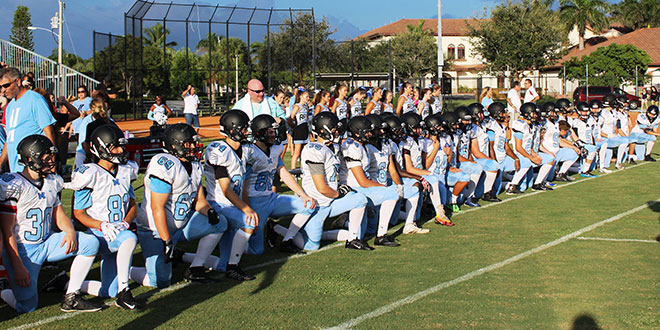 MIA football team is lined up and ready to go for its preseason game.

When the Marco Island Academy defensive line stuffed the quarterback on the last two plays of the game, the Rays earned a hard-fought win over Fort Myers-Gateway Charter, 45-38 on Aug. 19.

First-year coach Damon Coiro’s team was looking to shed its losing ways over its first four years. They did it in dramatic fashion as they rallied their way on offense and defense.

Coiro ran onto the field to share a bear hug with Tyler Gresham who scored three touchdowns and made numerous plays on defense.

Many of the players came off the field in tears of 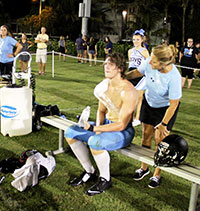 Lori Galiana, cheer director, checks on Bon Deese after he sustained a right shoulder injury while blocking for a Matt Grille touchdown. Playing with an injured left hand, Deese was one of the team leaders in the victory.

Senior defensive lineman Kyle Ginther was one of the leaders who was emotionally spent. Ginther was on the Rays first football team four years ago.

He could barely speak through the tears as he said, “We have come so far.”

Greshman said what the coaching staff and teammates are thinking.

“This is a different program. This is not the same Marco team we used to be,” he said.

The teams played to zero after one quarter, but Gateway concluded a drive with a one-yard touchdown by Ty Saboy on its first drive in the second half. Five minutes later they scored 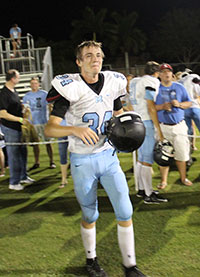 Senior Eddy Ludwigsen can’t hold back the tears after MIA’s win. The team showed grit, tallying the winning touchdown with 1:54 left in the game.

again on a 13-yard run by Chris Ceasar.

The Rays dug in on both unsuccessful two-point conversion tries by Gateway to keep the game close at 12-0.

The Rays spark came on Bryson Paul’s 65-yard kickoff return. Gresham bulled into the end zone for two points, cutting the lead to 12-8.

Gateway scored again before the half ended, but again could not convert on a two-point conversion, leaving the score at 18-8.

Ceasar, who ran for 317 yards, took the second half kickoff 91 yards for a score, but again MIA didn’t allow the two-point conversion. 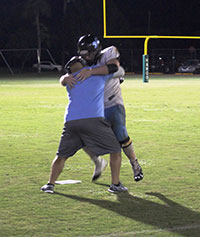 what it takes to get back in the game?

The tie lasted one minute when Ceasar scored and Saboy made good on the conversion, taking a 32-24 lead.

As the fourth quarter began, Gresham completed the drive with an 8-yard run and Moller made good on the conversion to tie the game at 32. Gresham scored again minutes later giving 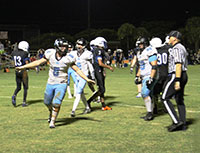 Tyler Gresham celebrates after scoring the winning touchdown. He was a standout on both sides of the ball as he scored three touchdowns and made key tackles.

the Rays the lead, but the two-point run failed, giving the Rays a perilous six-point lead.

With 4:33 left Gateway scored again. If its two-point conversion worked they would have the lead.

It didn’t. The Rays stood strong, stuffing the run to keep the score at 38 each.

The five missed two-point conversions did Gateway in.

Gateway tried an onside kick but Ginther gathered the ball in. With Moller and Gresham rotating carries, with a 35-yarder by Moller, Gresham scored the go-ahead touchdown. Josh DaCruz kicked his first extra point as the teams new kicker and the Rays took a 45-38

Gateway went on a last-gasp drive but the defense stopped them.

Two straight plays the Rays defense swramed the quarterback. On the last play it was Jackson O’Shea, Jay Cartwright and Brendan Howard meeting at the quarterback to end the game.

Coiro told his team after the game, “It’s about not giving up, being men and not lying down. You didn’t. All 11 hats ran to the football.”

He cautioned the team about overplaying the win. It was a preseason victory, with MIA opening the regular season hosting St. Petersburg-Shorecrest Prep at 7 p.m. on Aug. 26.