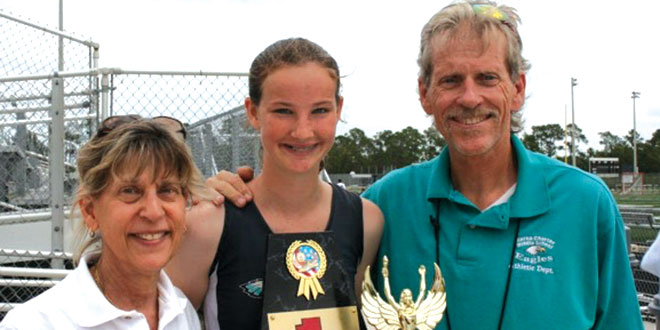 In a shocking move to most, Roger and Karen Raymond have resigned from Marco Island Charter Middle School (MICMS), effective September 1.

Roger Raymond has served as athletic director for MICMS since the beginning, creating all sports programs. He did the same for Marco Island Academy before resigning last year.

Karen Raymond has been the school’s musical director from the start, some 14 years ago. Her many musical productions were highlights each year.

Raymond is known throughout the state for his coaching abilities. His outstanding record at MICMS as a cross country, track and basketball coach put the school on the map for sports.

Raymond said the resignations were for family reasons, related to his mother and children who live in the Orlando area.

“At this point they just need some help from us. We need to be closer,” he said.

Raymond has been offered basketball and cross country coaching positions at Osceola High School near Orlando.

“Damien Shadrick will be taking over my position at MICMS and I will be assisting in the transition,” Raymond said. “He was on my first basketball team back in 1998.”

Raymond said that his relationship with both schools has been strong.

“I was to have served as the announcer for MIA’s football game on Friday night.” The Raymonds are going to Orlando over the weekend.

In regards to MICMS, Raymond said, “George (Abounader, Principal) couldn’t have been nicer to us.”

George Abounader had strong praise for the couple, sharing the following with Coastal Breeze News:

“Roger and Karen have been on the Island for over 30 years, and with our school since the day it was founded, over 18 years ago. Their legacy for the Island, in general, and our school in particular, is robust and widespread. Roger has done more for youth sports on our Island than anyone I know. He has organized hundreds of teams, games, tournaments, and matches and has coached thousands of school-age children over his sterling career. Karen has taught chorus for 18 years, and throughout those years close to 2,000 students experienced her passion and energy for the performing arts and performed in scores of productions that she directed. Our school is honored to be associated with Roger and Karen, and we are privileged to call them our friends. They are distinguished citizens of Marco Island, loyal employees of Marco Island Charter Middle School, and will be missed in many fundamental ways.”

Raymond said he will be at the school through September to help Shadrick get started.

In an email to the sports media he said, “Thank you for making my life seem special on so many occasions. I am grateful and humbled by this.”