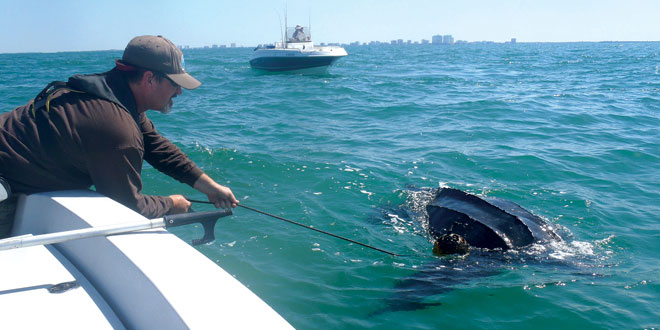 A boater approximately three miles west of Caxambas Pass on Marco Island called the FWC to report that a turtle was apparently entangled in a crab trap. RBNERR staff member Greg Curry was contacted and set out to find the turtle. To the surprise of many, it was actually a leatherback turtle, one not commonly found along the Gulf shore.

As seen in the photos, Curry was able to bring the turtle in by utilizing the crab trap that entangled it. He was then able to cut the trap 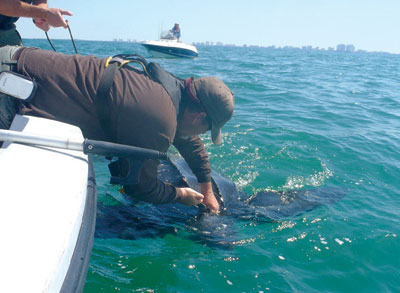 line in several places and the leatherback quickly swam free.

The turtle was identified to be of sub-adult age. The leatherback grows to be the largest turtle of the sea and is known to dive deeper and travel farther than most other species of sea turtle. It is also an endangered species due to loss of habitat, entanglements such as the one outlined here and, ingestion of garbage and the fact that even in perfect conditions, only one in 1,000 baby sea turtles make it to adulthood.

The boater should be applauded for taking the time to care and call FWCC.