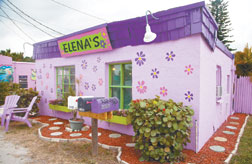 Shopping with a splash of color. PHOTOS BY KATHLEEN DOUGLAS/COASTAL BREEZE NEWS

I admit it. I’m addicted. Once I discovered Randy Wayne White and his passion for narrative set in South West Florida I became his number one fan. In between escapades shared with our hero, Doc Ford and his erudite trans-channeling sidekick Tomlinson, I get my RWW fix by visiting some of the places Ford frequents from his base in a stilt house/laboratory overlooking the flats of Sanibel Island. You can imagine how delighted I was to have a little mistake turn into a walk in Randy’s tracks!

Hoping to catch a tour of Useppa Island and lunch at the Collier Inn, I pointed ole “One 4 the road,” my Jeep Wrangler, north from Marco to Pine Island just north of Fort Myers. I wanted to introduce my Boston sea captain son to SW Florida marine life. Our first mission was to find lodging and book a tour to Useppa. The lodging part worked out beautifully but the tour was 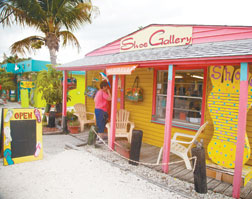 Useppa is an exclusive members’ only resort island. If you are not a member or a member’s guest you cannot board the island except by taking a ferry excursion that leaves from Captiva Island—a small island accessed by bridge to and through Sanibel Island. Since we would have to backtrack and waste the only day we had, we decided to make the best of it and, “bloom where we were planted”.

From the moment we left Cape Coral and crossed the bridge into artsy Matlacha (Mat-la-shay) I had to check and make sure we weren’t riding with Marty McFly in Doc’s time travelling DeLorean. Rocking with psychedelic color, the tiny village is a panoply of art galleries and shops. Each venue sporting its own little fabulously adorned building dotted along the sides of the road and looking like they were about to get up and jitterbug. The bridge and 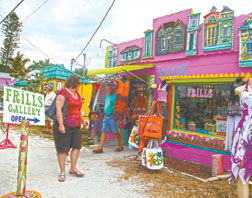 Matlacha serve as the portal into a tiny patch of Florida that has evaded hungry developers, chain stores, condos, posh marinas and endless pavement. It’s the portal into a laid back Old Florida Lifestyle of fishing villages and modest homes-what the Keys were 30 or 40 years ago. Pine Islanders call it “country Waterfront”. Made up of five sections, Matlacha, Pine Island Center, St James City, Pineland, and Bokeelia, the island is two miles wide and stretches one mile along Pine Island Sound.

St. James City, a small fishing village with direct access canals, is home to more than half of the population and the southernmost point of the island. After a late lunch in a funky waterfront restaurant, we traveled clear to the other end of the island to Bokeelia, and took a chance that the Tarpon Lodge would have a vacancy. Reservations are recommended but there was a cancellation 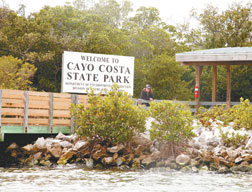 and we lucked out. Inside her office, Nancy, the manager, was listing the inn’s amenities when I spied a thank you note tacked to a wall of many. The writer said that he and his family had had a fabulous stay at the Tarpon Lodge. When Nancy finished ticking off all the inn’s wonderful features I added, smiling impishly, “And…Randy Wayne White Slept Here.” A little taken back she answered, “Yes, that too.”

Next door to our graceful 1920’s Old Florida style lodge is a marina and the home of Bob’s Tours where we were able to rent a Blue Wave skiff and a peppy 60HP Yamaha engine for an unbelievably reasonable price. The morning’s radiant dawn had predicted sunshine but by ten that morning the sky was, overcast and cold—not the best weather for a photographer looking for stunning seascapes. Maybe I shouldn’t have chuckled when I passed the American Bible College with a sign out front reading “Your

Sin Will Keep You Out” and over that another sign that read “Keep Out”. The weather proved to be our ally. It presented us with the opportunity to meet a most loquacious and amusing storyteller, Brian.

Heading West from Wilson’s Cut we located Useppa Island and became what my uncle called “rubber neckers”. Useppa’s known history is formidable. It was a Calusa stronghold dating back some 10,000 years until Europeans arrived in the 1500’s. Legend has it that a fierce Spanish pirate named Jose Gaspar fell head over swashbuckles for one of his conquests, a foxy Spanish Princess named Joseffa de Mayorga. Joseffa was having none of it so Gaspar thought that imprisonment on an island paradise might bring about the attitude adjustment he yearned for. How long Joseffa remained prisoner is unknown but her name has remained to this day and the Island became known as Useppa after the embattled beauty. In the late 1800’s a wealthy tycoon bought the 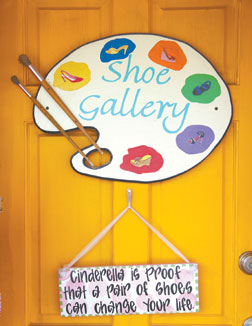 island and subsequently sold it Baron Collier. I was surprised to learn that Useppa was used by the US Government as a base for the 1961 Bay of Pigs invasion of Cuba.

Our plan was to explore some of the islands in the sound and stop at Cabbage Key for lunch at the restaurant that inspired Jimmy Buffet to write “Cheeseburger in Paradise.” We crossed paths with the Lady Chadwick, the Captiva ferry heading for Useppa with the tour we had wanted to be on. We had no regrets. Cayo Costa was our next stop and what a surprise. Cayo Costa, accessible only by boat and part of the Florida State Park system, is a 2,426 acre state park. This oak-palm and mangrove island has nine miles of beach and bicycle and kayak rentals, a ranger station and primitive cabins for camping. An inlet anchorage, buffeted by Punta Blanca Island. 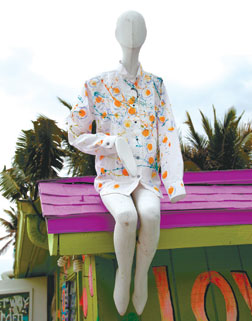 This makes you look twice.

Inter-Coastal Waterway Marker 61, Cabbage Key. As we neared the dock we slowed the engine, Lady Chadwick was looming behind and we heard the Captain radio in. “Better help those two, they don’t seem to know where they are going.” Hurmph! We’re cautious, that’s all. When the ferry pulled away the restaurant was suddenly quiet and only a few patrons remained. That’s why Bruce, the bartender, and long time resident had time to investigate what I was doing with that big old camera and why was I shooting up the place. Jimmy Buffet had indeed been there and had indeed written “Cheeseburger in Paradise.” “We thought he was just another drunk at the bar,” said Brian. Then he invited the owner and his family to a concert he was giving on the mainland and gave them front row seats. He called them up on stage and introduced the song.”

I told Brian about the Randy Wayne White thank you note 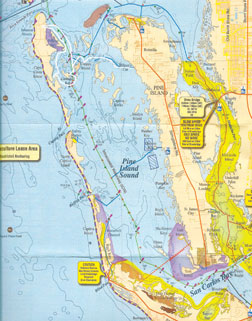 and he said, “He comes here all the time and sits at that table and writes. I know when he has writer’s block because he looks up at me and raises an eyebrow and I bring his favorite steak and a glass of wine.”

“One day we see this 90 foot old junkie schooner pulled up to the dock. Three guys get off and they were walking like this,” said Brian as he demonstrated a drunken stagger. Brian told us that he ran down to head them off before they could get into the restaurant. “We haven’t had a drink in four and a half years,” one of them complained. “We’re walking this way because we haven’t been off that boat in four and a half years!”

Randy, who had witnessed the encounter, told Brian to tell the sailors that he would like to buy them drinks but would like to talk to each one of them individually. I wonder which character grew out of those conversations?

And yes, Randy slept there.