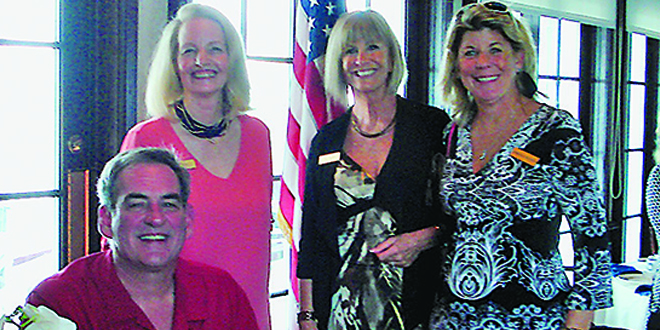 Writer and self-described “professional storyteller” Randall Kenneth Jones recently wowed the audience at the January luncheon of the Newcomers Club of Marco Island. This dynamic speaker, renowned journalist and author of the newly released bestseller, “Show Me,” inspired the Newcomers with messages of empowerment and positivity from many famous women.

The book includes interviews and words of wisdom from Carly Fiorina, Hoda Kotb, Vanessa Williams, Janet Evanovich, Erin Brockovich, Pat Benatar, Suze Orman, Cynthia Rhodes, Sue Monk Kidd and many others. Jones wrote the book on the platform of looking for the best in all people. Through his writing, he found not only that, but so much more. He learned the importance of a sense of humor, the power of language and the value of recollections. He urged the audience to capture their memories and put them in writing to preserve them for future generations. 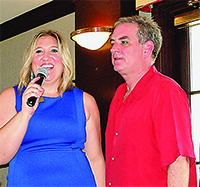 description of Marco Island’s Sue Monk Kidd and his humorous calamity on the TV set of Hoda and Kathie Lee. But perhaps the most touching tale was that of the unexpected gift of laughter for his 85-year-old father, the caregiver for Jones’ mother, who suffers from Alzheimer’s. According to Jones, his dad was never much of a reader, but was blessed with life-changing comic relief from Janet Evanovich’s Stephanie Plum series, an effect that neither his dad or Evanovich ever expected.

Following the luncheon, Jones graciously signed copies of “Show Me” for the audience. The book is currently available for purchase at the Marco Island Center for the Arts.

The Newcomers Club of Marco Island believes in empowering women through friendship. Membership is open to women who reside on Marco Island, Goodland or the Isles of Capri for at least six consecutive months of the year. For more information, please contact Donna Dubey at 239-682-0454, Kim Heinemann at 612-387-4747 or visit www.marconewcomers.org.