Raising the Flag at Fiddler’s Creek 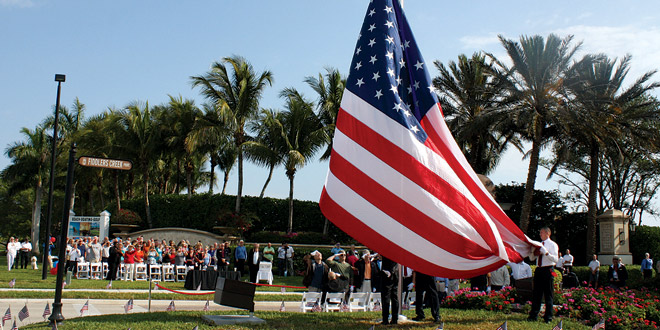 It was an occasion for celebration as residents of the Fiddler’s Creek community, located off of US-41, gathered at the main entrance to witness its first Flag Raising Ceremony, held on March 22nd.

The ceremony was as grand as the size of the flag. The Lely Trojans Marching Band was on hand, offering up patriotic tunes as residents filled the seats set out for the occasion. In the center median, just in front of the new flag pole, sat 13 veterans – all members of the Fiddler’s Creek Community. They were there to be honored but also to have the honor of participating in the passing of the flag on the way to the flag pole.

In true military fashion, the ceremony began promptly at 10 AM. General Manager of Fiddler’s Creek, Ron Albeit gave a heart warming speech that prompted some to tears.

Albeit stated, “The American Flag has so much meaning and symbolism in its colors – the color white, representing purity and innocence; red, hardiness and valor; and blue, for vigilance, perseverance and justice. May it always fly over our land, representing a government instituted by our founding fathers that will always champion freedom and justice for all.”

Albeit continued, stating, “It is a great honor to be here. It’s a once in a lifetime opportunity – a Fiddler’s Creek moment of history in the making, and a day to remember in the years to come. From this point on, the flag will be the first thing you see as you enter the community, a patriotic welcome. It is also your last vision as you leave the community, illuminating in the evening hours. This American flag will be part of the Fiddler’s Creek story.”

But the ceremony wasn’t just for the veterans who reside at Fiddler’s Creek. Veterans who worked for Fiddler’s were also recognized, including Dean Staar, Douglas Duprey, Karl Radzik and Lt. Jay Muholland.

An email received by a resident of Fiddler’s Creek was read by Albeit. “I am not a veteran, but a GoldStar Mother, which means that I have lost my son in the war. My son, Sgt. Thomas Gilbert USMC was killed in action in Iraq, October 2006. He was 24. I would like to thank all that were involved in putting up this flag to honor our veterans! It is so important to remember those that have given so much so that we can enjoy our freedom.” Currently at home in Illinois, the resident went on to say, “We have many wonderful memories of our son relaxing and enjoying himself at Fiddlers!”

The flag was then lowered to half-staff in honor of Army Staff Sergeant Marc Anthony Scialdo and a moment of silence followed.

Raised back to the top of the flagpole, all joined in on reciting the Pledge of Allegiance as doves were released by Beck Weaver of Spirit in the Sky, just as the flag made it to the top.

Thanks to some excellent lighting work by Condee Cooling and Electric, Inc., the flag will fly 24 hours a day, seven days a week, flying high as a symbol of liberty and freedom for all to see – be they residents of Fiddler’s Creek or simply driving by on US-41. For those in attendance, as Albeit said, the March 22nd Flag Raising Ceremony will be a day to go down in history for its residents.