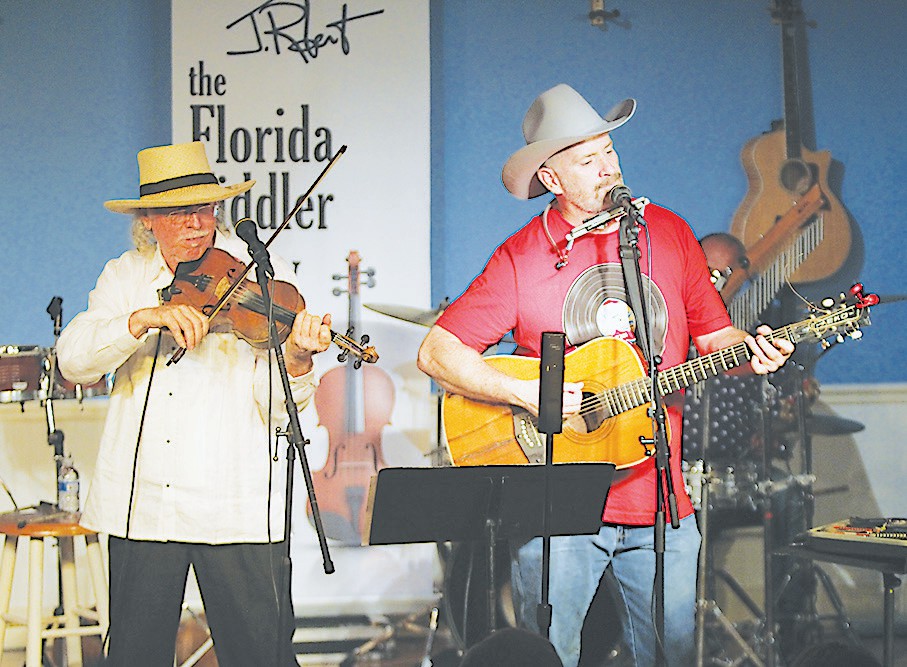 Florida Fiddler JRobert opened his ambitious Florida Songwriter Showcase Monday night, June 5, at the Marco Players’ theatre, when he presented Raiford Starke, the singer-songwriter whose stage name represents the name and location of two of Florida’s most notorious prisons; the Florida State Prison in Raiford and the Bradford Correctional Facility in Starke.

Starke’s performance is fittingly stark…and sincere. His delivery is not brimming with personality, like one might expect considering his affiliation with JRobert’s rollicking Florida Fiddler Show.

Starke’s stark delivery was popular among the crowd that packed the Marco Players’ Theatre. His sincerity shown through immediately when he performed the song he is perhaps most recognized for: “Girl From Immokalee.”

Starke delivered solid performances of a collection of his favorites.

While JRobert is known for frequently changing instruments, Starke sticks with a weathered acoustic throughout his set.

Though they haven’t played together often, JRobert deftly added fill to Starke’s performances, with his array of fiddles and a mandolin.

Starke’s sincerity won the crowd over as he worked his way through a set list, detailed on a crumpled sheet of paper that JRobert jokes that he has used “for the last 50 years.”

The crowd especially enjoyed a storysong “Dog Paw Tea” that Starke said was written about a friend’s iced tea that tasted like a dog’s paw was dipped in it.

JRobert’s Florida Songwriter Showcase lasts all summer, with performances every Monday night. The format has the artists playing for an hour and a half, then doing a question and answer session, followed by a jam session with the artist; a solid three hours of entertainment.

In all, 13 artists from throughout South Florida will grace the Marco Players’ stage.

“I love this place,” JRobert crowed to the crowd in praising the Marco Players’ theatre. “You can hear every word.”

Do yourself a favor and join in this celebration of the best singer-songwriters South Florida has to offer. Admission is affordable, $30 in advance and $35 at the door. Rest assured, you’ll leave feeling thoroughly entertained, and maybe even a little more educated about Florida history.