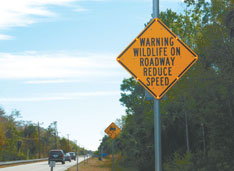 These signs will light up when an animal, 18 inches or taller is near the roadway. Drivers are urged to slow down and be alert when the lights are flashing.

The Florida Department of Transportation has recently finished installing the first Roadside Animal Detection System(RADS) in the state of Florida. The system, which identifies animal life near roadways, exists along a 1.3 stretch of road on US-41 which runs through Big Cypress National Preserve. By partnering with the Defenders of Wildlife as well as the U.S. Division of Fish and Wildlife, the Florida DOT hopes these signs will decrease vehicle/animal collisions, especially pertaining to the endangered Florida panther.

Florida FWC estimates that there are only about 100 to 160 adult panthers left in the state. Male panthers, in general, will cover a territory of about 200-square miles and can be extremely aggressive to other males within their area. However, it is hard to find 200 miles of unobstructed land anywhere in the state of Florida due to human encroachment. Roadways such as US-41 and I-75 cut directly through the natural habitat of not only the Florida panther, but also black bears, deer, bobcats, coyotes and more.

According to Debbie Tower of the Florida DOT, “When SR-84 was reconstructed to become Alligator Alley, or I-75, in the early nineties, we added wildlife crossings underneath the highway. This has also been done on areas of SR-29 to prevent collisions.” The cost of these types of systems, however, is extremely expensive and was also met with some hostility when being considered as an option for US-41.

Defenders of Wildlife initially proposed that something must be done to lower the amount of collisions along US-41, especially in the 1.3 mile area which lies in Ochopee near Turner River. “Panthers often follow the rivers,” explains Elizabeth Fleming of Defenders of Wildlife. “Through research we have found that the area near Turner River also has a high density of female panthers and kittens.”

“We have certainly noticed panther activity in that area. Since 2004 to 2010, six panthers were killed on that stretch of road,” adds Ken Warren of the U.S. Fish and Wildlife. One, a five-month old kitten, was found dead less than a month after his mother had been struck along the same mile of road.
The U.S. Fish and Wildlife and Defenders of Wildlife worked together to request a grant from the U.S. Transportation Enhancement Fund to develop a system that would work in this area. They received $650,000 for the project and through the 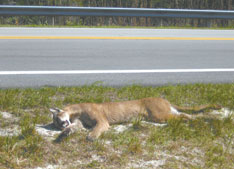 This female panther was originally struck by a vehicle in 2004 along the 1.3 mile stretch of US- 41 that is now being monitored though RADS. She suffered a compound fracture to her rear leg, severe blood loss and damage to her teeth. She was taken to the University of Florida’s Veterinary School in Gainesville for surgery. Meanwhile, a search began for the panther’s two five-month old kittens that biologists knew she was rearing. Unfortunately, they were not able to find the kittens. Less than a month later, her male cub was struck and killed along the same 1.3 mile stretch. The female kitten was never found. Biologists assume that she perished as she would be too young to fend for herself. After ten months, the female panther made a full recovery and was released back into a remote area of the Big Cypress National Preserve. Three days later she was found here, once again, in the same area where she was originally struck. This time she didn’t survive. Biologists believe she was probably looking for her kittens.

Florida DOT a “design-build” project was proposed. Through this unique approach, the RADS option was chosen.

This innovative and less invasive option is also inexpensive compared to other ideas. Of the $650,000 granted, only $450,000 was used, putting $200,000 back into the Transportation Enhancement Fund.

The system consists of six solar-powered signs, three on either side of the road, that blink in tandem when an animal is near the road. Sensors set 18 inches off the ground monitor any animal movement and will cause the signs to light up for five minutes, alerting drivers to slow down. The LED lights are extremely bright as to properly alert drivers both during the day and at night.

The Roadside Animal Detection System will also serve as a learning tool for FWC, the Florida DOT and Defenders of Wildlife. “Funding is in place to begin monitoring activity more closely beginning later in the year,” Tower explains. “We will be monitoring the system for two years to get a much better idea of what kinds of animals are being seen and when.”

“We are excited for the potential for this new technology to teach us more about the panther population in the area,” adds Fleming of Defenders of Wildlife.

The sensors and flashing signs are useless, however, if drivers don’t do their part and slow down when they see the active signs. “When animals and cars tangle, it is dangerous for both ends,” Tower continues. “We hope these signs will protect wildlife and reduce deaths, certainly amongst the panther population, but we also want to protect human life.”

It is important to remember that much of US-41 between Naples and Miami is in protected land, such as the 1.3 mile area located in Big Cypress Preserve. This means that wildlife exists everywhere, not just within that specific area. Drivers are encouraged to keep the speed limit and always be aware of your surroundings. With everyone doing their part, it is possible for panthers and humans to live together safely.

To report panther threats, pets or livestock lost to a panther, or an injured or dead panther, call the FWC’s Wildlife Alert Hotline at 888-404-FWCC (3922). For more information on how to live safely with panthers, download the “Living with Panthers” brochure at www.FloridaPantherNet.org. The purchase of panther specialty license plates helps fund panther research and management. Visit www.buyaplate.com for more information.